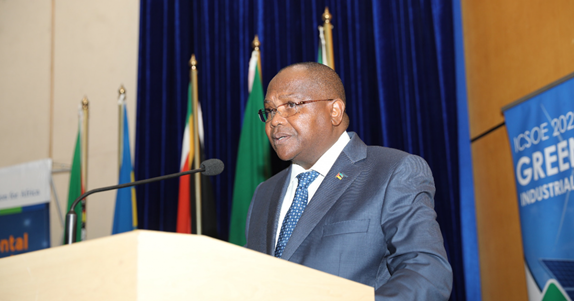 “We need Mozambique to be a strategic centre for implementation of green initiatives to power green industrialization  to help us fight against natural disasters and droughts that the country is prone to” said Mr. Silvino Jose Moreno, Minister of Trade and Industry, Republic of Mozambique.

Mr. Silvino said his country is honoured to be elected as Chair of the 28th Intergovernmental Committee of Senior Officials and Experts (ICSOE) on behalf of the Republic of Mozambique along with Botswana as Vice Chair and Angola as Rapporteur. He said this was a great opportunity for Mozambique to link its chairmanship and its 2021-2035 National Industrialization Programme aiming to increase productivity, increase exports, improve trade balances, encourage import substitution and contribute to job creation.

He thanked the ECA Secretariat for developing a focused two-day work agenda, whose thematic focus  encouraged an approach that will contribute to the development and growth of Southern Africa, in line with Africa’s vision as stipulated in Agenda 2063 for, “a prosperous Africa, based on inclusive growth and sustainable development as well as  environmentally sustainable and climate resilient economies and communities”.

In his opening Statement, ECA Acting Executive Secretary, Mr. Antonio Pedro noted that the theme of the 2022 ICSOE for the Southern Africa region on ‘greening industrialization through digitalization, infrastructure development and regional integration: leveraging the AfCFTA’ was very timely for a region  rich in natural resources and has the opportunity to add value to its products in order to create the much-needed jobs and yet still struggles with poor socioeconomic outcomes across the board.

He highlighted that most countries in Southern Africa have been unable to achieve and sustain value added manufacturing beyond 25% of GDP which is an acceptable threshold for structural transformation. In the last few years, only Eswatini, Lesotho and South Africa has been able to record a sustained value-added level of above 15% of GDP. In addition, a lack of economic diversification and a narrow export base comprising mostly of raw commodities undermines the region’s resilience to shocks whether economic, climatic, pandemic or war driven, impacting on the economic fundamentals exacerbating vulnerability to poverty, inequalities and social cohesion.  Mr. Pedro further stated that “industrialization still holds the promise for jobs, increased productivity, inequality and poverty reduction that this region desperately needs.”

The out-going ICSOE Chair, represented by Mr. Rhino Mchenga, Acting Director Economic Affairs, Malawi Ministry of Finance remarked on the high level participation that involved the private sector and said all countries in the region must transition to a carbon-neutral environment as African economies find the balance between economic growth and minimal damage to the environment to help counter effects of COVID-19 characterized by poverty, unemployment, and inequalities in the region.

The ICSOE participants were welcomed to Maputo by United Nations(UN) Resident Coordinator for Mozambique, Ms. Myrta Kaulard,  in a message delivered on her behalf by ECA SRO-SA Director, Ms. Eunice Kamwendo, she promised full support of the UN Country Team in Mozambique and expressed, “commitment of the United Nations to work with the leaders and people of Africa in making inclusive and sustainable industrialization an effective pathway to a prosperous and peaceful continent for people and the planet through its Country Cooperation Framework”.