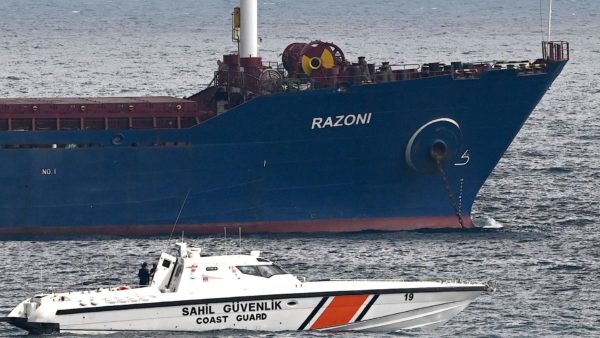 A solemn photo taken on August 1 under the clichés of cameras around the world and a humanitarian cause highlighted. But the Razoni cargo ship, one of the first 5 to leave the port of Odessa thanks to the Russian-Ukrainian treaty obtained under Senegalese-Turkish auspices, has still not reached the port of Beirut. The Ukrainian ambassador stationed in the land of cedars had nevertheless invited the press and prepared the petit fours but had to cancel at the last minute, sending the colleagues back to a later date. The Ukrainian representation instead published a photo of the ship in question, the Razoni, on Monday 8. “According to information from the skipper, the end buyer refused the cargo due to a delay in delivery times (more than five months). The captain is now looking for another buyer, either in Lebanon or in another country,” she explained on Twitter. An explanation that does not convince in maritime circles. The customer is informed of all the details and must give his agreement before any movement of the vessel.

For his part, Philippe Chalmin, historian and economist at Paris Dauphine University and founding president of the journal Cyclope, believes that the reversal of Razoni is completely logical. Indeed, the Lebanese buyer had concluded this transaction six months before, but the delivery of the cereals was delayed because of the war. It is therefore possible that the Lebanese buyer had doubts about the quality of the cargo,” he told RTL. “He is perfectly entitled to say ‘I’m no longer interested, anyway, we already had a case of force majeure (the war) so I’m not obliged to take the cargo,’ explains Philippe Chalmin. “This cargo is on the market and probably, with a substantial discount, it will find its destiny somewhere,” he continues.

In the background, the Cargo Razoni and its cargo of 26,500 tons of corn, located Monday off Alexandretta, in southern Turkey according to the Washington Post, participated in a double operation of maritime chartering and trading. Has the cargo supplier delivered its product against an open letter of credit through correspondence between its bank and that of its customer? Did the customer really invoke the delay of the shipment supposed to be delivered in February? Was the sale firm at the outset or rather optional, payable under certain market fluctuation conditions and on delivery as is sometimes the case in international trade? Would this first shipment have been rather political and executed urgently with the support of the Ukrainian authorities and the international community in order to test the feasibility of exporting cereals and other foodstuffs? Who chartered the Sierra Leone-flagged vessel operated by Razoni Shipping LTD, a company registered in Monrovia, the capital of Liberia? Questions remain.

For sure, the cargo is now pending order, which is rather commonplace since many traders do not specify a port of disembarkation but disembarkation areas. The goods change hands several times before their final recipient. Today, several scenarios can arise. A trading house could very well intervene when seeing that the status of the vessel has changed from “to port of,” to “awaiting order”. the variation in the international price of the cereals concerned. Depending on the new sale price, the trader could commit and would benefit by directing his cargo to the place and time where its value will be quoted at the maximum.

Act on the three cost-of-life levers

This example of the Razoni is quite an illustrator of modern maritime commerce which is not based on humanitarian considerations but rather on techniques of commerce, finance and law. The African States committed in unison to the high cost of living by renouncing, each in its territory, the payment of taxes and by resorting to subsidies, act only on the short value chain of the imported product between its exit from the port and the consumer’s plate. In our view, states are shooting themselves in the foot by giving up valuable inputs and mobilizing grant money for a hypothetical outcome. Because the real determinants of imported inflation are to be found in the long logistics chain of departure, at the level of purchase from the supplier, freight and port efficiency. Group purchases by African states entrusted to a consortium of licensed traders will save billions of dollars. Traders will know how to exercise the necessary options and choose the periods for buying goods and chartering ships. It is known, the freight to the black continent is among the highest in the world not because there is any plot hatched against the Land of Lucia but rather because the Africans buy cash the goods and the transport there where it would have required dynamic management of stocks (silos) associated with maritime brokerage houses and merchants who will be able to manage freight year-round.

A major grain importer with a food security policy, shouldn’t ECOWAS consider facilitating a common approach that would take an option on some of the 20 million tonnes of Ukrainian grain currently available at competitive prices? and agreed with the international community? Wasn’t this approach validly initiated by the current Chairman of the African Union, Macky Sall, during his trip to Russia and implemented under the auspices of Turkey and its President Erdogan ?

At the African level, Afreximbank, known for its expertise in trade instruments, could perfectly provide the necessary lines of credit by associating a pool of private banks. The advantage would also be to be able to integrate a temporary mechanism of clear and comfortable subsidies. By group purchases and upstream negotiations of cereals to be exported, money will be saved on purchase and transport. There will still be one last bastion of the inflation to blow up: African ports. These entry and exit gates for goods have few handling means and are overloaded with procedures that are often repetitive, useless and sources of corruption. A simple update of paperwork and dock scheduling could save customers millions of dollars in demurrage (delay penalties) common in African ports. If these three factors (purchase, freight and ports) are controlled, the costs of imported cereals and other food products will have been reduced without forcing the State to cripple itself by waiving its taxes and drawing on its budget to support the purchasing power.

Aren’t the planned exports of cereals from Ukraine and Russia a great opportunity for our countries to have access to cheap cereals to fight against the high cost of living while waiting this time to really develop our local corn production? , sunflower and rice for our own food security beyond the usual slogans?