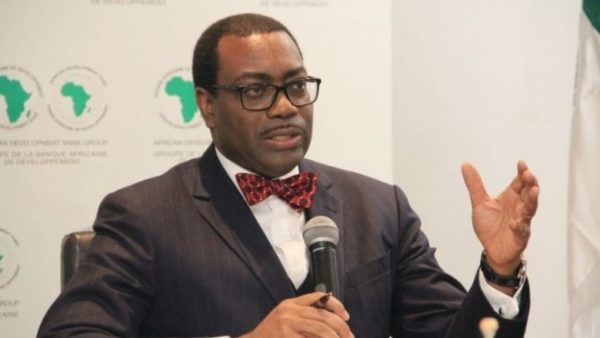 Washington, DC, 24 April 2022 – African Development Bank Group President Dr Akinwumi Adesina says “Africa must prepare for the inevitability of a global food crisis.” He was speaking about Africa’s priorities, as a guest at the Atlantic Council’s Africa Center on Friday. Fielding questions from the Council’s Africa Center Chair, Ambassador Rama Yade; Senior Fellow Aubrey Hruby; and Washington/UN correspondent for Jeune Afrique and The Africa Report, Julian Pecquet, the Bank chief called for an increased sense of urgency amid what he described as a once-in-a-century convergence of global challenges for Africa.

According to Adesina, the continent’s most vulnerable countries had been hit hardest by conflict, climate change and the Covid-19 pandemic, which had upended economic and development progress in Africa. He said Africa, with the lowest GDP growth rates, had lost as many as 30 million jobs on account of the pandemic. Speaking about the impact of the Russia-Ukraine war, Adesina expressed sympathy for the people of Ukraine, describing their suffering as unimaginable. He said the war’s ramifications spread far beyond Ukraine to other parts of the world, including Africa. He explained that Russia and Ukraine supply 30% of global wheat exports, the price of which has surged by almost 50% globally, reaching identical levels as during the 2008 global food crisis. He added that fertilizer prices had tripled, and energy prices had increased, all fueling inflation. Adesina warned that the tripling costs of fertilizer, rising energy prices, and rising costs of food baskets, could worsen in Africa in the coming months. He noted that 90% of Russia’s $4 billion exports to Africa in 2020 was made up of wheat; and 48% of Ukraine’s near $3 billion exports to the continent was made of wheat and 31% of maize.

Adesina cautioned that to fend off a food crisis, Africa must rapidly expand its food production. “The African Development Bank is already active in mitigating the effects of a food crisis through the African Food Crisis Response and Emergency Facility – a dedicated facility being considered by the Bank to provide African countries with the resources needed to raise local food production and procure fertilizer. “My basic principle,” Adesina said, “is that Africa should not be begging. We must solve our own challenges ourselves without depending on others…” The Bank chief spoke about early successes through the Bank’s innovative flagship initiative, Technologies for African Agricultural Transformation (TAAT) program, a program operating across nine food commodities in more than 30 African countries.

Adesina said TAAT has helped to rapidly boost food production at scale on the continent, including the production of wheat, rice and other cereal crops: “We are putting our money where our mouth is. We are producing more and more of our own food. Our Africa Emergency Food Production Plan will produce 38 million metric tons of food.” He said TAAT had already delivered “heat-tolerant varieties of wheat to 1.8 million farmers in seven countries, increasing wheat production by over 1.4 million metric tons and a value of $291 million.”

According to Adesina, heat-tolerant varieties were now being planted across hundreds of thousands of hectares in Ethiopia and Sudan, with extraordinary results. In Ethiopia, where the government has put the TAAT program to work in a 200,000-hectare lowland irrigated wheat program, farmers are reporting yields of 4.5 to five times per hectare. He said TAAT’s climate-smart seeds were also thriving in Sudan, which recorded its largest wheat harvest ever – 1.1 million tons of wheat – in the 2019-2020 season. He added that TAAT came to the rescue during the drought in southern Africa in 2018 and 2019, deploying heat-tolerant maize varieties which were cultivated by 5.2 million households on 841 thousand hectares. As a result, he said, farmers survived the drought in Zimbabwe, Malawi and Zambia, allowing maize production to expand by 631,000 metric tons to a value of $107 million.

Adesina also spoke about the urgent and timely need for a strong replenishment of the African Development Fund – the Bank Group’s concessional lending arm that supports low-income African countries. He said the Fund has connected 15.5 million people to electricity and supported 74 million people with improved agriculture; it has provided 50 million people with access to transport; built 8,700 kilometers of roads; and provided 42 million people with upgraded water and sanitation facilities. The Bank chief said there were three lessons to be learned for Africa from the challenges Africa is facing: first, that the continent could no longer leave the health security of its people to the benevolence of others; second, that it must look at health investments differently, and make the development of a health defense system a priority—investing in quality health infrastructure as a must—and third, that economies—which were already turning around—must create fiscal space to deal with debt challenges.

Asked about the outcomes for Africa of the global climate summit, COP26, in Glasgow last November, and how he foresaw prospects for success at COP27 in Sharm El Sheikh, Egypt in 2022, Adesina expressed optimism. He said it was important for developed countries to make good on their promise to provide Africa with the $100 billion a year required for climate adaptation. Adesina said: “Our challenge is adaptation because we didn’t cause the problem. In Africa, we are adapting to climate change.” He explained that the African Development Bank, together with its partner the Global Center for Adaptation, was mobilizing 25 billion dollars to support climate adaptation in Africa.

The African Development Bank chief highlighted the importance of the technology sector as a driver for growth in Africa, and prospects for young people on the continent. Adesina described Africa’s youth as one of its greatest assets. He lauded the contributions of young entrepreneurs in the fintech, digital, creative arts and entertainment industries. He said the need by young entrepreneurs for innovative financing is why the Bank is exploring with stakeholders the establishment of specialized youth entrepreneurship investment banks to unlock potential and economic growth.