Ivory Coast: After New York, the line to Washington already under discussion 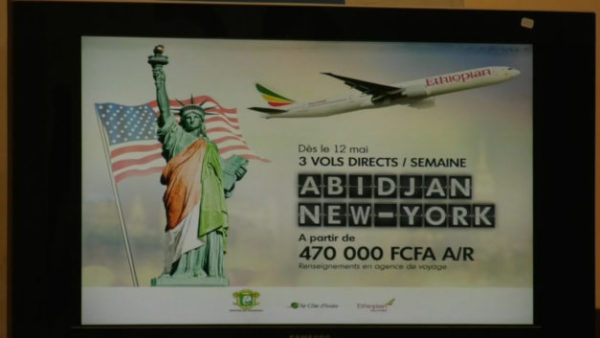 The Ivory Coast which has just inaugurated the direct line to New York, in the United States, already plans to open an air link to Washington.

“We have already opened discussions with Ethiopian to open other destinations in the United States. (…) We are working to ensure that in addition to New York, we can also from Abidjan go to Washington, “said Amadou Koné, the Ivorian Minister of Transport, a few hours of the inaugural flight, 12 may.

This first flight to North America comes to sign the end of the “frustrations” of a whole country who was offended at not being able to rally directly to the first world power, said Gon Coulibaly, the Ivorian Prime Minister. A distant memory with now three weekly direct flights (Tuesday, Thursday and Saturday) to the Newark airport in the suburbs of New York. An ambitious bet especially that the international airport Felix Houphouet-Boigny of Abidjan is in competition with other West African airports.

But for travelers, there is one to choose Abidjan: 470 000 CFA francs, or just over 716 euros, the ticket back and forth, from the Ivorian economic capital, a third of what they disbursed through other African countries or other continents before joining America. “A price that is not promotional as some may have thought,” insisted Amadou Koné, which is the result of “efforts” tax rebate on the airport platform.

The other asset of Abidjan is the national airline Air Côte d’Ivoire which concluded at the beginning of the month a code sharing agreement with Ethiopian Airlines. Air Côte d’Ivoire will ensure the role, within the framework of this partnership, to transport on its flights travelers from the region, including Lagos, Bamako, Cotonou, Accra and Lome, to Abidjan and make them benefit from the direct connection to New York.

For this first year of operation, the country plans to record “60,000 passengers at least” on the US line, said Amadou Koné. And overall, the expectations are far more important in terms of the attractions of economic operators and American tourists to Côte d’Ivoire.

It should be noted that Ethiopian Airlines flights depart from its base in Addis Ababa to stop in Abidjan before joining New York. It remains to be seen whether the carrier, which already provides the same link to the United States, from Lome, Togo, will be able to maintain the two lines competing in West Africa or review its strategy in the region.

After surpassing 2 million passengers in 2017, compared to 600,000 in 2011, the Abidjan airport expects to see a new record leap in traffic.