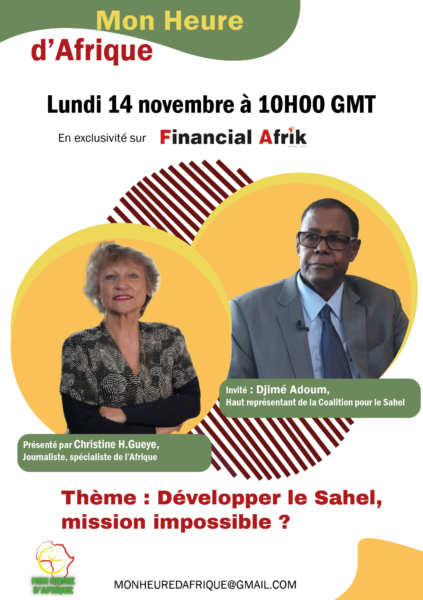 The second issue of Mon Heure d’Afrique (MHA) will be broadcast on Monday, November 14 at 10:00 GMT on the Financial Afrik group’s TV channel.

Former Chadian Minister of Agriculture and Secretary General of the Permanent Interstate Committee for Drought Control in the Sahel (CILSS) for seven years, Djimé Adoum, who officially took office in Brussels on September 16 as High representative of the Coalition for the Sahel, is the guest of honor.

The theme chosen for this program: “Developing the Sahel: mission impossible? ”Enabled us to review the major challenges facing the Sahelians today: terrorist threats and underlying conflicts, the influx of refugees and displaced persons, the consequences of climate change and the degradation of agricultural land as well as rampant corruption, especially in mining contracts.

Djime Adoum explained in detail the role of the Coalition for the Sahel on the basis of the four pillars decided at the Pau Summit in January 2020 by the Heads of State of the G5 Sahel, namely the military strategy, the training of the armies of the countries of the Sahel, the return of the State and administrations and, above all, development. He also commented on three reports filmed in Senegal, Niger and Burkina Faso, before being challenged on the “plus” that this Coalition represents compared to other organizations present in the region, the risk of a strategic divide, the evolution. traditional herders / pastoralists conflicts and mining governance.

In the role of the experts who agreed to challenge the High Representative of the Coalition for the Sahel are Emmanuel Dupuy, president of the Institution for Prospective and Security in Europe (IPSE), Estelle Barack, founder and president of the consulting firm KeraliT and Alain Antil, director of the Sub-Saharan Africa Center of the French Institute of International Relations (Ifri).

Designed and produced by journalist Christine Holzbauer Gueye, this new show entirely dedicated to Africa, with an African point of view, is filmed from Paris. At a time when the relationship between the continent and France is at its lowest, the bet is daring. “At the end of the show, my distinguished African guests must choose and say whether the relationship between Africa and France is hated or blessed. But, in both cases, it’s how they think this relationship should evolve that interests us the most, “says the producer of” Mon Heure d’Afrique. ”

This West and Central African specialist has traveled the continent as a correspondent for major French newspapers from Bamako (Mali) and Dakar (Senegal), where she lived for more than fifteen years. In parallel with the show she produces, directs and presents, she has created an eponymous association.

Aimed at promoting freedom of expression in Africa and in the African diasporas through the audiovisual sector, the MON HEURE d’AFRIQUE association aims to organize training for Image Reporter Journalists (JRI) as well as seminars to help young people fight against “Fake News” in social networks.