African Leadership: World Must Double Down on Climate Adaptation to Secure Africa 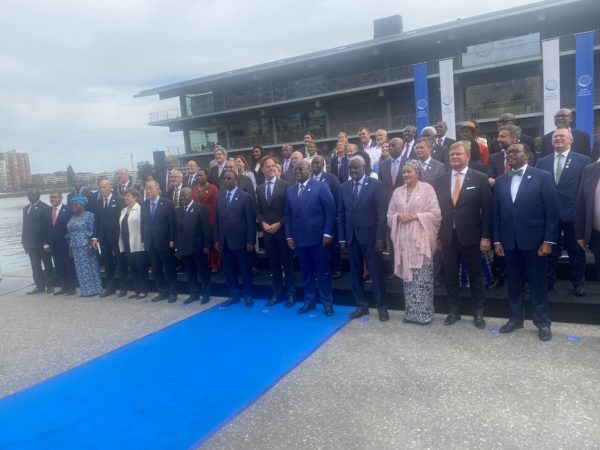 African and global leaders joined the African Adaptation Summit at the Global Center on Adaptation, outlining the most critical elements of the global community’s response to the climate crisis that heavily affects Africa as the world’s most exposed region, two months ahead of the UN’s world climate conference at Sharm al-Sheikh, Egypt (COP27).

“Africa is unstoppable. But Africa is ground zero for the global climate breakdown. Nobody benefits if Africa fails to tackle it. Climate fallout in Africa cannot be contained so adaptation action can and must scale at breakneck speed across the continent. The world has to double down on adaptation at the UN climate summit in Egypt just weeks away.”

He added that “We need an adaptation delivery breakthrough for Africa at COP27. That means adaptation finance visibly flowing in Africa. It means the financial ask on wealthy nations for the Africa Adaptation Acceleration Program and its Upstream Financing Facility is delivered by COP27. If we fail, all the progress of Glasgow’s COP is at risk.”

The Summit’s five-point Communique highlighted that Africa was at a tipping point due to being most exposed to the food crisis triggered by the Ukraine conflict as well as the frontline of the global climate breakdown. It underscored that Success at COP27 will depend on whether the needs of Africa, the world’s most climate-vulnerable continent, are met, with finance flowing into key country-led adaptation programs such as the Africa Adaptation Acceleration Program (AAAP).

“You have to adapt or die. We do not have the choice. Our time to act is coming to an end. Africa must prioritize adaptation. Africa needs to invest massively in adaptation and resilience. As Chairperson of the African Union, I urge Africa’s development partners to fully fund the AAAP and make it an exemplary model of what is possible when we collaborate. This impact will be enhanced through your support to the AAAP Upstream Financing Facility and the African Development Bank’s Climate Action under the ADF Replenishment. The AAAP is what delivers on the vision of the Africa Adaptation Initiative.”

“COP26 marked a breakthrough thanks to your determination to put adaptation on the global agenda by doubling adaptation finance. Now, with your help, we must keep that promise. With your support, the AAAP can make this vision a reality,” concluded President Macky Sall.

The Summit highlighted that Africa is warming faster than other regions. Its underlying socio-economic vulnerabilities also mean that nine out of ten of the world’s most vulnerable countries are in Africa, where food expenses make up 75% of the income of the continent’s poorest groups when more than a fifth of all Africans are already food insecure. The number of Africa’s poorest nations at high risk of debt distress has also tripled in the past decade.

“If we want Africa to thrive, we must adapt to climate change. Africa must close the adaptation financing gap. We cannot wait. I look forward to the swift implementation of the AAAP. The fate of our continent and the planet depends upon it.” President Akufo Addo also highlighted adaptation priorities for COP27 including calling for “a standalone implementation plan of the COP26-agree doubling of adaptation funding by 2025. It’s time to turn words into deeds and ambition into action. Crucially, we expect progress and we expect to see how funds will flow into country-led programs like the AAAP.”

President Felix Tshisekedi of the Democratic Republic of the Congo and co-host of the PreCOP27 said:

“We are here because we believe the AAAP is needed not just for Africa, but for the world. When Africa wins, the world wins. We cannot let Africa be held back and undermined by the climate crisis. We need partnership to forge a resilient future. With an African COP this year, we cannot miss out on a win for Africa on climate. To secure that win, we need to at minimum see the AAAP Upstream Financing Facility mobilized, positioning the AAAP to drive the full $25 billion in adaptation projects on the ground.” He added that “our Pre-COP meeting in Kinshasa next month aims to springboard the priorities of Africa and the most vulnerable nations to center-stage at COP27. As a part of the Pre-COP we will also host the CVF’s high level Forum of Vulnerable Nations event because this is the voice that matters the most in the climate crisis.”

“The Glasgow decision urges developed countries to collectively double adaptation funding by 2025. This must be delivered in full, as a base line. Developed countries need to provide, by COP27, a clear roadmap of how and when they will deliver on this commitment.”

The Deputy Secretary-General Mohamed also underscored that delivery on adaptation finance will be a “litmus test” for countries honouring their end of the Glasgow Pact, and joined the call for COP27 to deliver a breakthrough on implementation for adaptation.

The Summit at the GCA’s floating headquarters in Rotterdam harbour announced US$55 million in new contributions from the United Kingdom ($23m), Norway ($15m), France ($10m), Denmark ($7m), among other supporters to the AAAP Upstream Financing Facility managed by the GCA, whose 1:100 leverage ratio will influence over 5 billion in climate adaptation investments across Africa. The Upstream Financing Facility was described by GCA Chair and 8th Secretary-General of the United Nations Ban Ki-moon as the “transmission belt” for the best global and regional knowledge and innovation directly to large-scale investment projects in Africa.

“COP26 was an important milestone for adaptation, but we have to pick up the pace and turn commitments made in the Glasgow Climate Pact into urgent action if we’re to protect those most vulnerable to the impacts of climate change.

As agreed at COP26, developed nations need to at least collectively double climate adaptation finance to developing countries by 2025.

Public finance will not be enough, which is why initiatives such as the Africa Adaptation Acceleration Programme are key to mobilising private sector engagement and investment for adaptation.”

“Norway has committed to double our climate finance and at least triple support to adaptation by 2026. For Norway, GCA is a key partner in advancing the climate adaptation and food security agenda. We welcome GCA’s cooperation with the African Development Bank on the AAAP. AAAP’s objectives are fully in line with our priorities. How can we – together – minimize the risk of climate disasters? How can we make food systems more resilient – making the most vulnerable better placed to cope with the next drought, flood or plague? How can we – at the same time – create much needed jobs, especially for the youth? AAAP is definitely an important part of the answer. I would therefore encourage more partners to join our efforts.”

Minister of State for Development of France Chrysoula Zacharopoulou:

“France remains highly committed to tackling climate change and supporting adaptation in African countries. On behalf of President Macron, I am proud to announce our decision to invest 10 million euros in the AAAP’s Upstream Financing Facility. This effort should leverage a total of 1 billion euros of adaptation investments, and support concrete local improvements in environmental quality and resilience.”

“Denmark has set a clear goal: 60% of our climate aid will help developing countries to adapt to climate change. In total, Denmark expects to give at least 1% of the collective target of 100bn I hope this can pave the way for massive investments in adaptation and green energy in Africa. And Denmark will continue to do our part. We are deeply committed to meet climate challenges, and to deliver on our promises.”

Over seventy leaders from the international climate and development community attended the Dialogue which concluded with a Communique adopted in the presence of the Dialogue’s Co-Conveners, Chair of the GCA Board, Ban Ki-moon; CEO of the Global Center on Adaptation, Professor Patrick Verkooijen; African Union President Macky Sall of Senegal; Climate Vulnerable Forum Chair President Akufo Addo of Ghana; PreCOP27 host President Tshisekedi of the Democratic Republic of the Congo; and Co-Chair of the GCA Board, Feike Sijbesma.

The following are the five points of the Africa Adaptation Summit’s Communique:

1.       Africa at a tipping point: The international community needs to reckon with the multiple economic, climate and health crises that are pressuring Africa.

3.       Adaptation Finance Doubling Implementation: Progress and transparency on the COP26 agreement to doubling international finance for adaptation by 2025 through delivery into the country programs of the most vulnerable will be central to the success of COP27.

4.       Capitalizing Africa’s Adaptation Program (AAAP): COP27 is the opportunity for the international community to show solidarity with the bold adaptation efforts of the world’s most vulnerable continent by closing in on the outstanding resourcing need for the African Development Fund (ADF) climate action window.

5.       Delivering the AAAP Upstream Facility: Making available the AAAP Upstream Financing Facility’s full resourcing needs by COP27 positions the AAAP itself to drive its full ambition into adaptation projects on the ground across Africa, a headline deliverable for the “African COP.”

In closing remarks Feike Sijbesma, Co-Chair of the GCA, noted:

“Investments in global climate adaptation cooperation are a big opportunity for countries like the Netherlands to share some of our best innovations with those who need them the most. The AAAP will be a crucial vehicle for triggering far greater business investment across Africa into green and resilient solutions. This is a collective effort, we need every sector, every contribution possible to see off the climate crisis in Africa, and the private sector, in particular, has a massive role to play.”

About the Global Center on Adaptation

The Global Center on Adaptation (GCA) is an international organization which works as a solutions broker to accelerate action and support for adaptation solutions, from the international to the local, in partnership with the public and private sector, to ensure we learn from each other and work together for a climate resilient future. Founded in 2018, the GCA is hosted by the Netherlands, working from its headquarters in Rotterdam with a knowledge and research hub based in Groningen. The GCA has a worldwide network of regional offices in Abidjan, Ivory Coast; Dhaka, Bangladesh and Beijing, China. Through this evolving network of offices and global and regional GCA teams, the organization engages in high-level policy activities, new research contributions, communications, and technical assistance to governments and the private sector.