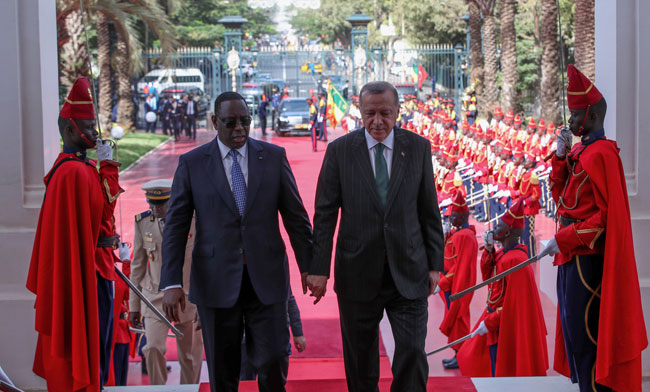 On the eve of his fifth visit to Senegal, Turkish President Recep Tayyip Erdoğan sent a message to the Senegalese people. “We consider Senegal, a shining star in its region, as a flagship country with great potential which will mark the future of the continent as it has marked its history”

“TÜRKİYE-SENEGAL: A STRONG FRIENDSHIP ROOTED IN HISTORY AND LOOKING TOWARDS THE FUTURE”
Among African countries, Senegal occupies an exceptional place in the heart of our nation. The roots of the fraternal relations between our two peoples go back six centuries. Relations between Türkiye and Senegal, which were built on these solid foundations, have been strengthened every year since the 1960s. This is how the country of Téranga has played an essential role in the partnership policies of our countries with the African continent to such an extent that Senegal and Dakar have become one of the first addresses of our nation to achieve a new reunion with Africa.

Our embassy in Dakar, which became operational in 1962, is one of our first missions opened on the continent. The Turkish Cooperation and Coordination Agency (TİKA) opened its first office in West Africa in Dakar in 2007. Since its establishment, TIKA has supported Senegal’s development by signing 186 projects with a total value of $12 million nationwide. Our Turkiye Diyanet Vakfi Foundation, on the other hand, has allocated a budget of around 10 million euros for the humanitarian aid activities it has been carrying out throughout the country since 2008.

During my mandate as Prime Minister, and since 2014, as President of the Republic, I have ensured that special attention is paid to Senegal. We have tried to develop our cooperation in all areas with this brother country, which has established itself as a monument of stability in West Africa. I have visited Senegal five times, including as Prime Minister. Each time, we included representatives of our business community in the important delegations that accompanied me. We have always encouraged our companies to invest in Senegal, to increase their existing investments and to create jobs for our Senegalese brothers and sisters. I consider the fact that Turkish investors stand out in Senegal for their honesty, reliability, hard work and quality as the best expression of the beneficial results of our efforts.

I think the fact that our Senegalese brothers shared the same feeling and the same will as us in this process, played a vital role in our success. In particular, I appreciate and welcome the importance that my dear friend President Macky Sall attaches to cooperation with Türkiye. In fact, in the last year alone, we have had the opportunity to have four meetings, three of which were in person. Thus, while identifying new areas of cooperation between our two countries, we have further strengthened our partnership framework with the agreements we have signed. The seven agreements signed during my visit in January 2020 are an important sign of the potential between the two countries.

We are happy to see the positive reflections of the Türkiye-Senegal friendship in many areas, especially in trade and investment. The Construction and management of the Blaise Diagne International Airport, the Abdou Diouf International Conference Center, the Polyvalent Sports Center Dakar Arena, the new 50,000-seat stadium, among other infrastructure projects, are concrete examples of the support provided by Türkiye to the economic and human development of Senegal. Turkish companies also actively participate in the “Emergent Senegal Plan” and carry out the projects they undertake. The success of our businesses is also a great source of pride for our country.

Our bilateral trade continues to grow despite the turmoil in the global economy. In 2020, when world trade contracted by 5.3%, we exceeded $380 million in trade between our two countries. In 2021, we broke an all-time record with trade volume reaching $540 million. In the coming period, our common goal is to push our exchanges even further to reach 1 billion dollars. We sincerely believe that we will achieve this goal like those we have already achieved in recent years.

On the other hand, we do not find it right to confine our relations with Senegal solely to the economic and trade areas. We consider Senegal, a shining star in its region, as a flagship country with great potential that will mark the future of the continent as it has marked its history. This is why we contribute to Senegal’s vision projects through our companies, but we do not neglect to invest in young people who are the insurance of our future. The number of Senegalese students who have benefited from Türkiye Scholarships since 1992 has reached 187. The total number of students from Senegal currently in our country, either on their own or with Türkiye Scholarships, has exceeded 1200. In our schools of the Maarif Foundation in Türkiye, a total of 1,000 Senegalese children receive education at all levels, from preschool to higher education, in five different campuses. Our cultural cooperation will accelerate with the contributions of the Yunus Emre Institute.

As a nation – having never participated in the shameful colonial fact in its millennial history on the African continent – we want to strengthen our friendship with Senegal in all areas. We are ready to advance our cooperation, which has already increased with mutual visits and investments on the basis of respect, equal partnership and win-win in the coming period.

The solidarity we have shown during the coronavirus epidemic, which has negatively affected the whole world, has opened new windows of opportunity beyond bringing us closer to each other. Our countries, which share a common history as well as a common future, will continue their blessed walks by taking advantage of these opportunities. The works that we will inaugurate during our visit will undoubtedly give us strength and courage in our journey. I hope that our official visit, which will take place after a two-year hiatus, will be beneficial for our countries.

I take this opportunity to congratulate Senegal on their success at the African Cup of Nations.

On my behalf, that of my delegation and my nation, I ask all Senegalese to accept my most sincere greetings.