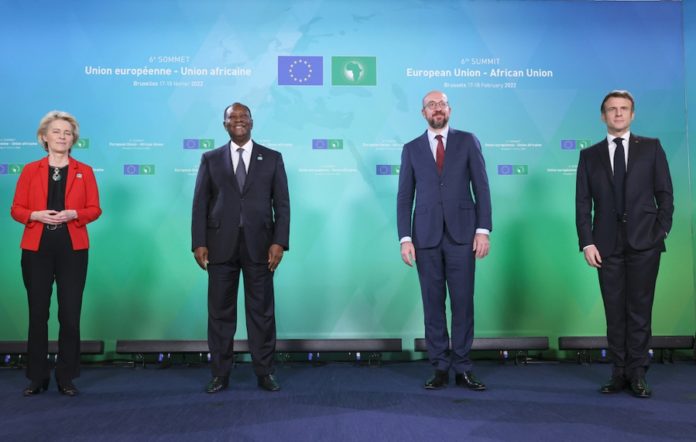 As the 6th summit between the European Union and the African Union opened in Brussels on Thursday February 17, Emmanuel Macron delivered a panegyric on his African policy the day before. But his counterpart for the African Union, Macky Sall, expects more from Europe than a semantic change.
By Christine Holzbauer.

Relations between Africa and Europe must be overhauled in order to achieve a true partnership for the benefit of Africa. The speeches by Macky Sall and Emmanuel Macron on the eve of the 6th European Union/African Union summit (February 17-18), in Paris, set the tone for what this “new deal” could be for Europeans vis-à-vis -vis de l’Afrique – which France calls for!

After having engaged in a detailed review of his African policy for five years, starting with his speech in Ouagadougou, in October 2017 and ending with the Africa France Summit in Montpellier, in October 2021, the French Head of State, who was finally forced to withdraw its troops from Mali, posed as a defender of African interests with European countries, in particular the sustainability of the funding promised since the last Europe-Africa summit in Abidjan.

A commitment that he reiterated in his opening speech in Brussels because, as President Macky Sall had pointed out before him – who took the opportunity to outline the eight key points on which Europe must help Africa -, “the promises have not yet been kept! “. Starting with the 100 billion reallocation of Special Drawing Rights (SDRs) to Africa which had nevertheless been promised at the Summit on the financing of African economies, in Paris, on May 18, 2021.

Better finance infrastructure
The Elysée clarified that Emmanuel Macron was able to meet Thursday, in Brussels, on the sidelines of the summit, with the Managing Director of the International Monetary Fund (IMF), Kristalina Georgiavia. He reiterated France’s commitment to reallocate 20% of its SDRs for the benefit of the revival of African economies. The continuation of African debt treatment initiatives was also discussed.

For the French Head of State, it is indeed crucial that Europe meets the financing needs of the African continent, especially after the pandemic which has hit him hard economically. According to the latest figures from the OECD, Africa will suffer from a sharp decline in its growth in 2022, falling below the average rate of 5% at the global level.

Those around him admit that there has been a form of disappointment on the part of certain African states with regard to the partnership with Europe: “It is because Europe has not been sufficiently perceived as a reactive player, flexible and adapted to the financing needs of the African continent, hence the choice to work with other players, in particular China, for the financing of its infrastructures”, affirms an adviser.

The French Presidency plans to “launch an ambitious Africa-Europe investment package taking into account global challenges such as climate change and the current health crisis. “, Hammered Emmanuel Macron. During her visit to Dakar last week, the President of the European Union Commission, Ursula van der Leyen, announced that 150 billion euros of investment in infrastructure would be released. Something to delight President Macky Sall for whom this decision “marks the return of Europe in sectors (transport, energy, ICTs), vital for the development of Africa. »

A boost for entrepreneurs

But the main challenge remains the mass of young people arriving on the market each year. To Macky Sall’s heartfelt cry for funding to be channeled in a sustainable way to help these young people find work by training them better, France responded favorably: 1% of the total amount of Official Development Assistance (APD) could thus be dedicated to them.

France already has two programs to its credit to enable young African entrepreneurs to access financing that they would otherwise not have been able to obtain from local banks. The first, Choose Africa, is overseen by the French Development Agency (Afd). It makes it possible to distribute “small tickets” of 10,000 to 30,000 euros to initiate an entrepreneurial project. Until now, it was endowed with 2.5 billion dollars over 5 years, “but will be replenished in the coming years”. As for the Digital Africa program, – relaunched at the Montpellier summit -, it is topped up with 130 million euros and intervenes directly in support of African digital entrepreneurs.

There is still a device on which President Macron had committed during the G7 in Biarritz. Headed by the African Development Bank (AfDB), Hafawa enables women entrepreneurs to benefit from loans on more favorable terms. As for the mechanisms in favor of entrepreneurs from the diaspora in France, – with projects on the African continent, – they make it possible to intervene with both direct or intermediary financing and technical support.

The software change
It is now a question of releasing at European level funding of 10,000 to 100,000 euros through African funds for SMEs. “For certain specific projects, this amount could reach up to one million euros!”, According to an Elysian source. The IFC (World Bank Group), the European Commission and the AfDB – of which the EU is one of the largest donors – will be direct contributors to this new facility.

For Emmanuel Macron, this massive support is “a way to help get out of the software according to which the public service is perceived as the main provider of jobs. However, today we are witnessing an African youth “who are resolutely turning towards entrepreneurship. “Statistics also show that “Africa is the most entrepreneurial continent in the world”, he recalled.

The change of name of the Afd, -announced at the Montpellier summit-, is another example of this stated desire of the French President to “change software vis-à-vis Africa. According to the director of the Afd, Rémi Rioux, intense consultations are continuing “internally and externally” and, in particular, with the president of the West African Development Bank (BOAD), Serge Ekué, and the president of the African Development Bank (AfDB), Akinwumi Adesina, both present at station F. for the three round tables organized before the arrival of the two presidents.

It is in this high place of the High Tech universe of French start-ups that Emmanuel Macron explained to his Senegalese counterpart, -a little skeptical-, that more than the change of name of the Afd, it is the very semantics of “development” that will have to be changed. Starting with the term itself on which he had been challenged by young people from civil society at the Montpellier summit. Several hypotheses have been considered, but the term “development” which appears in almost all donor acronyms in Africa is likely to be resisted.