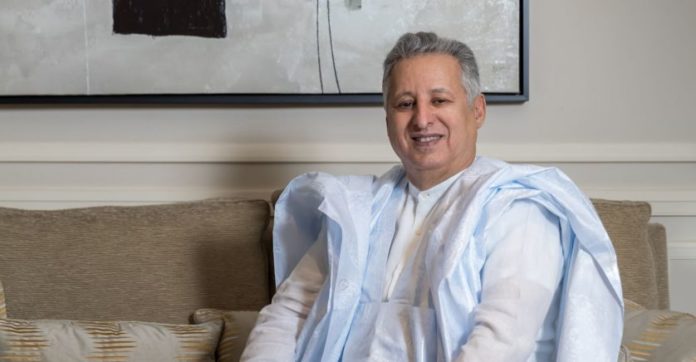 “My presence in Mauritania shows that things have changed. Otherwise I wouldn’t be here ”

Returned from exile since March 11, 2020, Mauritanian businessman Mohamed Ould Bouamatou loudly proclaims his ambition to contribute to the emergence of a prosperous Mauritania. Benefiting from the abandonment by the new regime of President Mohamed Ould Ghazouani of the international arrest warrant issued against him three years ago, the banker marries the present with hope with a new decade of construction and achievement.

Talk to him about the 2050 horizon for a developed Africa, Mr. Bouamatou does not believe it. For the boss of the eponymous group Bouamatou Société Anomyme (BSA), the change is now. Present at the fourth edition of the Financial Afrik Awards, held on December 16 and 17, 2021 in Nouakchott, he gives us the reasons for his optimism.

You are back in your country after ten years of exile. Do you think things have really changed?
I am convinced of it. This decade we are in today is a decade of hope. It is also the decade of serenity and tranquility. Before, Mauritania was going through years of lead with a gang of vultures and raptors who looted the whole country and who prevented anyone from doing business except a small inner circle. Unfortunately, that cost us a whole decade.

Now hope is reborn with President Mohamed Ould Ghazouani. Already, my presence in Mauritania shows that things have changed. Otherwise I wouldn’t be here. I have been in exile for years and am far from the only one because so many businessmen have been in the same situation as me. I am sure that with this new decade we will have food security, equality between people, peace of mind, the encouragement for new investments and the revival of business. There is hope. There is a certain serenity. We sleep with peace of mind, which was not possible before. There is change.

People who were in power before used power as a shortcut to enrich themselves. He (ex-President Mohamed Ould Abdel Aziz, editor’s note) once declared that he is poor and is the president of the poor, that he only had a drill to drill. Ten years later he returns to say that he has become rich, that he is a billionaire and that his billions will continue to grow. Have you ever heard a single head of state in the world declare that he has become rich and that his fortune will increase? Have we heard this all over Africa? The answer is just no.

So I am convinced that this new decade is the right one and will be the decade of food self-sufficiency and the emergence of Mauritania.

Do you believe in a developed Africa by 2050?
I don’t believe in projections that far away. Giving projections for 2050 is a bluff. Time goes very quickly, things go fast. You have to make short-term projections, ten years for example, no more. Personally, I believe in the prosperity of Mauritania. Our country is already prosperous and rich. Mauritania has 600 kilometers of coastline and 600 kilometers of river. In addition to that, we have gold mines and iron mines. Mauritania already has everything to be rich. If we did what Morocco is doing in the fishery which has 1.5 billion jobs, we would have zero unemployment here. So we have to take inspiration from the example of Morocco.

Regarding food self-sufficiency, how is it possible that Mauritania, which has the Senegal River, can import vegetables? Have you ever seen a single country in the world that imports vegetables? It does not exist. So these are all examples of the decade of lead that the old regime established.

I am really confident that before President Ghazouani’s term ends, the country will no longer import vegetables. We will be self-sufficient. And I’m sure that’s a goal we can achieve.

What are your prospects for investing in Mauritania?
All that is possible. I am an investor and I am interested in everything. Mauritania must offer investors the freedom to exercise. The state must be the guarantor and not the manager. The state should not compete with businessmen. Rather, it must give them the opportunity to develop, it must support them. This is the role of the state.

Why can’t Mauritania be as developed as Dubai? Mauritania has the means to become the Dubai of West Africa during this decade. We can do it.

What do you say to foreign investors who wish to invest in your country?
Let them come and invest. That Mauritania is not what it was before with the other regime. They will no longer have to bow to anyone. They will no longer have to go through the members of the gang that was here. This is all over. They will only have to invest in transparent projects. But I tell them to do in Mauritania what they would do in their own country and behave flawlessly.