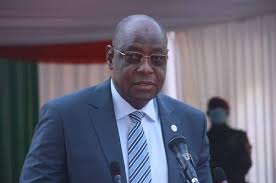 The governor of the Central Bank of the Republic of Guinea (BCRG), Lounceny Nabé, and his two vice-governors were removed from office by a presidential decree published on the night of December 7 to 8, 2021.

They are replaced by Karamo Kaba, who was promoted to governor, a strategist economist who was on duty at Ecofi Investment France. Its vice-governors are Mohamed Lamine Conté, previously Director General of Supervision, and Souadou Baldé, until then Vice-Manager and Head of the Supervision Department of credit institutions.

This sweep comes three months after the coup d’état led by Colonel Mamadi Doumbouya against Alpha Condé. Since then, the putschist in power has announced a new government and new appointments at the head of the institutions.

Press release from the Central Bank of West African States