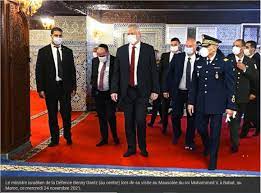 Morocco and Israel on Wednesday (November 24th) signed a memorandum of understanding on security allowing the two countries to benefit from increased cooperation in the fields of intelligence, industrial cooperation and military training. The deal has been called a “pioneer.”

The agreement was signed by Israeli Defense Minister Benny Gantz during his visit to Morocco and his Moroccan counterpart Abdellatif Loudiyi. Gantz arrived in Morocco on Tuesday evening for a two-day official visit

According to a statement from the Israeli Defense Ministry, “the agreement provides a solid framework which formalizes the defense relations between the two countries and lays the foundations for any future cooperation.”

The agreement formally launches security cooperation “in all its aspects” (operational planning, purchasing, research and development, training) between the two countries, barely a year after the normalization of their relations, in the face of “threats and challenges in the region “.

Morocco and Israel resumed relations in December 2020 as part of the “Abrahamic Agreements”, a process of normalization of relations between the Hebrew state and Arab countries supported by the administration of former US President Donald Trump . As a reminder, Rabbat ended his diplomatic relations with the Hebrew state at the start of the second intifada, the Palestinian uprising of the early 2000s.

This agreement makes Morocco the fourth Arab country to normalize its relations with Israel in 2020 after the United Arab Emirates (UAE), Bahrain and Sudan.

Since then, an Israeli embassy has been opened in Morocco during a visit by Israeli Foreign Minister Yair Lapid to Rabat last August. The Moroccan liaison office in Tel Aviv was also reopened and a direct flight between the two countries was launched.