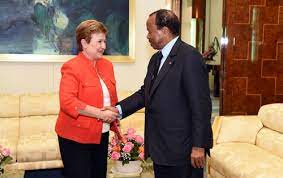 The extraordinary session of the Conference of Heads of State of the Central African Economic and Monetary Community (CEMAC) on August 18, 2021 in Cameroon, whose main issue relates to “the evolution of the macroeconomic situation in the CEMAC zone in context of the Covid-19 pandemic and analysis of recovery measures ”will see the participation of special guests, including the Managing Director of the IMF, Kristalina Georgieva.

This presence explains a source close to the file demonstrates the economic stakes of this summit which takes place at the end of the first generation of programs with the International Monetary Fund (IMF), the negotiations and the conclusions of the second phase of the economic and financial programs backed by the Extended Credit Facility (ECF) and the Extended Credit Mechanism (ECM). A situation which makes some analysts say that the CEMAC countries are economically under Brettons Woods trusteeship in a format “somewhat different” from the Structural Adjustment Program (SAP) of the 1990s.

Already at the previous extraordinary summit of CEMAC leaders in 2016 in Yaoundé where the possibility of a devaluation of the CFA Franc was evoked with insistence, the then Managing Director of the IMF, Christine Lagarde, had taken part in the work. which were going to lead to the FEC. The next summit should also observe the same participatory color as its predecessor, because alongside the Managing Director of the IMF are also expected the representative of France, in this case, the Minister of the Economy and Finance, Bruno Le Maire. and the president of the African Development Bank (AfDB) group Akinwumi Adesina.

In addition to the opening and closing speeches delivered by the Cameroonian Head of State Paul Biya in his capacity as current President of CEMAC as well as the speech by the President of the CEMAC Commission, Daniel Ona Ondo, the three “Special guests” will make presentations on dedicated themes. It should be recalled that this conference of Central African leaders is taking place in a difficult economic environment particularly impacted by the COVID-19 pandemic, with a community growth rate of -1.7% in 2020 against 2.5% in 2019 and a projected growth of the Gross Domestic Product (GDP) to 1.3% in 2021.