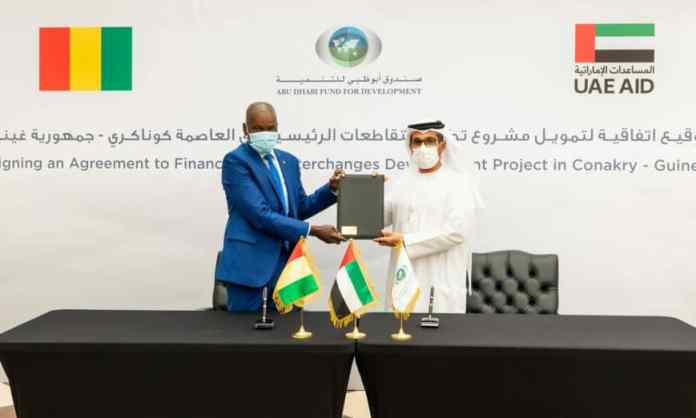 Announced several years ago, the construction project of the four interchanges (Hamdallaye-Bambeto-Cosa-Cité Enco5) in the suburbs of Conakry to facilitate traffic flow in the Guinean capital reached a new phase on August 8, 2021, with the announcement of the signing of an agreement between the government and the Abu Dhabi Fund for Development (ADFD), in favor of a concessional loan worth US $ 26 million for the construction of the Bambeto and Cosa interchanges.

The Abu Dhabi Fund for Development, (FADD), the economic development arm of the government of the United Arab Emirates, with the release of these 26 million USD, is one of the three donors of this gigantic construction project. road infrastructure, with the Kuwaiti Fund (USD 27 million) and the Islamic Development Bank-IDB (USD 52 million). This project, which will include the construction of interchanges, roundabouts and tunnels designed to better link the service and feeder roads to the city’s main artery, the “LePrince” road, will include the widening of the crossroads to two times two voices (2 × 2) which cross these roundabouts with interchanges.

It is predicted that this urban road network modernization project will ultimately significantly reduce congestion in the city center while connecting key urban areas integral to economic growth and improving overall road safety. The financing for the Hamdallaye interchange having also already been completed on June 21, 2018, thanks to the Kuwaiti fund for an amount of $ 27 million, the feasibility studies conducted by the Louis Berger cabinet finalized, the projects approved by the parliament, the calls for tenders launched, the start of work on these two interchanges (Hamdallaye and Bambeto) should begin soon.

The overall cost of the project is in the order of $ 104 million.

Guinea: depreciation of the local currency due to the “inflexibility” of prices