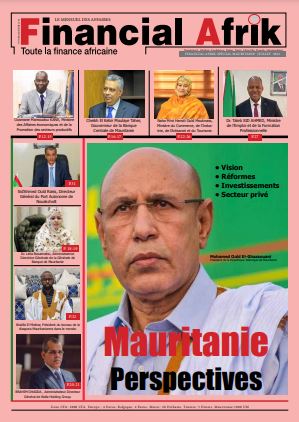 The Financial Afrik newspaper publishes its special issue “Mauritanie, perspectives”. This 40-page special issue addresses the salient points of Mauritania’s development strategy, business environment reforms and investments likely to be made in PPP mode or even the stability of the banking and financial system through a exclusive interview with the governor of the Central Bank.

To the analyzes of the experts on the legal environment of the private sector, the evolution of the agro-pastoral sector, the prospects of green hydrogen, are added the interviews with Kane Ousmane, Minister of Economic Affairs and the Promotion of the Productive Sectors , Mrs. Naha Mint Hamdi Ould Mouknass, Minister of Trade, Industry, Handicrafts and Tourism, Dr Taleb Ould Sid’Ahmed, Minister of Employment and Vocational Training and Sid Ahmed Ould Raiss, Director General of the Autonomous Port of Nouakchott.

The private sector is expressed in this issue through an interview with the leaders of Wafa Holding, the country’s leading agribusiness group, and an exceptional interview with Leila Bouamatou, the first Mauritanian to lead a banking group and symbol of the renewal of the business world.

The objective of this special issue is to encourage a constructive dialogue between the public authorities, the private sector, technical-financial partners and investors interested in the immense opportunities offered by Mauritania, a link between the Maghreb and the ‘West Africa.