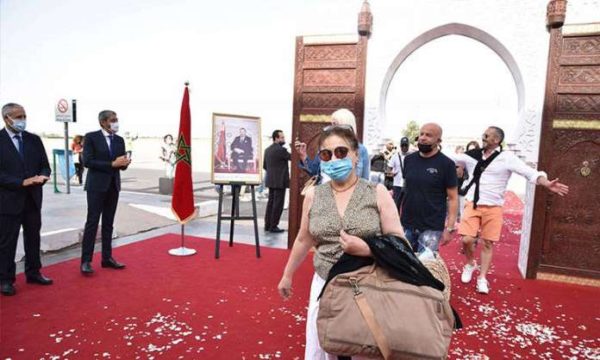 The public “Marhaba” (welcome) campaign to welcome Moroccans living abroad (known as “MRE”) on the occasion of their summer returns has never carried its name so well and illustrated its original spirit. Traditionally located in Moroccan and European ports (Spain, France, etc.) to assist MRE during their road trip of several thousand kms and facilitate their access to the country of origin, the 2021 campaign offers them more than they do. could hope: to return to Morocco by plane at the cost of a coach! Thus and on royal instruction, the RAM (Royal Air Maroc) has been offering since June 13, more than 3 million seats, including 600,000 in charter, from June 15 to September 30, 2021, with return fares starting at 97 euros. , for a family of at least 4 people. Over the period mentioned, 3.5 million air seats will be made available to travelers, or nearly three quarters of the capacity offered during the same period of 2019! In memory of African diasporas, this is quite simply unprecedented and historic!

With this announcement that no one had seen coming, the Sharifian kingdom has achieved a real masterstroke. On the one hand, the Moroccan authorities are reconciling with a diaspora which had felt let down in recent months with the country’s health blockade and the consequent parsimony of repatriation flights. Two, with over two million MRE deemed spenders expected for the summer thanks to this campaign, the threat of a dry tourist season and more is remote. Third, the country succeeds in a resounding publicity stunt that the backfires of powerful European airlines have not extinguished; these latest collateral victims of the massive cancellation campaign of travelers wanting to take advantage of the promotion of RAM were the quickest to cry out for unfair competition with public subsidies, forgetting in passing that they themselves had greatly benefited from the billion in subsidies from the Covid-19 plan granted by their respective governments.

Especially Morocco gives Africa a lesson in economic pragmatism for the present and the future … Since the MRE so essential to the economy and tourism (around 10% of GDP all inclusive and 40% of tourist visitors) want massively return to reunite with their families after 24 months of deprivation following the pandemic; since the current diplomatic quarrel with Spain has resulted on the ground in the closure of the main land and sea hubs through which more than 3 million MRE usually transit; the “technical” solution found is in the airlift and in the campaign to promote diasporic tourism which will see this summer the entire sector (transport, hotels, leisure, banks, etc.) deploy preferential advantages and price reductions to MRE!

Despite some technical hiccups at the start, with a million tickets already booked in less than ten days, Morocco’s calculated bet should even exceed all expectations. And the best is yet to come… To see the unanimous jubilations of the MRE on the forums, the country should gain much more than the vacationers coming to recharge their batteries with family and to spend their currencies in the country. With the capital of recognition and trust thus reconstituted or even strengthened, the authorities will be able to count on these partners deemed to be loyal and who have become essential when it comes to engaging the country on the tortuous paths of post-Covid-19 recovery.

Yet another opportunity wasted by countries that rely on their diaspora …

These issues in Morocco are common to a majority of African countries with economies very weakened by the pandemic and increasingly dependent on counter-cyclical financial flows from their diaspora … In an emotionally charged context for diasporas collectively wishing to come and recharge their batteries with their families in the country of origin after months and years of deprivation, there was there for the countries of origin, a political time conducive to a new beginning with the diaspora. This opportunity, which is about to be missed by almost everyone, is all the more heartbreaking given that this turning point in the post-Covid-19 reunion was not the most complicated to operate and potentially the most fertile for the future (economy, morale of diasporas and their families, trust…). Samir Bouzidi is Ethnomarketer & international expert in mobilizing African diasporas. Committed entrepreneur – founder of the solidarity start-up “Impact Diaspora”.