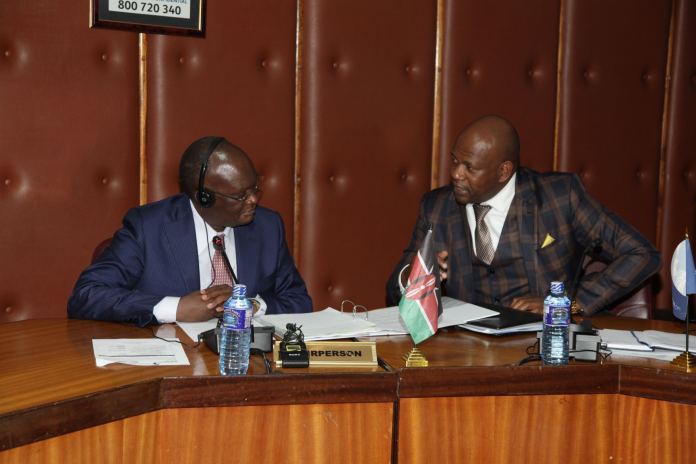 Cameroon’s Minister of Housing and Urban Development, Ms. Célestine Ketcha Courtès, will assume the presidency of the AGM Bureau during the company’s 40th AGM.

Nairobi: May 28, 2021: Kenya Transport, Infrastructure and Housing Cabinet Secretary James Macharia, who is the current Chair of the Shelter-Afrique Annual General Assembly (AGM) Bureau, will convey the coat to the Minister of Housing and Urban Development of Cameroon, the Honorable Célestine Ketcha Courtès, during the 40th AGM of the Company and the annual housing symposium which will take place from June 20 to 26, 2021 in Yaoundé, Cameroon.

Ms. Courtès was elected first vice-chair of the AGM board at the company’s 39th AGM, held in Nairobi. She will be replaced by Zimbabwe’s Minister for National Housing and Social Services, Mr. Daniel Garwe.

Presiding over the Annual General Assembly meeting held virtually from Shelter-Afrique’s head office in Nairobi on May 26, 2021, the Honorable Macharia briefed the Ministers of Cameroon and Zimbabwe on the performance of the company during his tenure. . He thanked the shareholders, his fellow ministers present from Cameroon and Zimbabwe, the Chairman of the Board of Directors of Shelter-Afrique, Dr Steve Mainda EBS, the Managing Director, Mr Andrew Pandeka Chimphondah for their continued support during his tenure.

“When I assumed the chairmanship of the Shelter-Afrique AGA Bureau at the Company’s 38th AGM in Morocco, no one anticipated a pandemic of the magnitude of COVID-19. Despite all the challenges, we were able to adapt quickly to the new realities. I am pleased to report that the Company’s performance has exceeded our expectations. The Company turned around and posted a profit of US $ 1.85 million in 2020 despite the challenges of the pandemic. Shareholder contributions to Shelter-Afrique have doubled in support of the rebirth of the well-governed institution. I am confident that the new management will benefit from the same goodwill on the part of shareholders, the board of directors, management and staff, ”said Mr. Macharia.

While thanking the shareholders for their support, the Honorable Courtès thanked the Honorable Macharia for his effective leadership of the AGM Bureau. She further assured him that plans to host the best 40th AGM and 40th Anniversary of Shelter-Afrique were at an advanced stage and that the beautiful hardworking people of Cameroon were well prepared and eager to welcome the 44 Housing Ministers. and the 44 Ministers of Finance who would arrive in Yaoundé, Cameroon from June 20 to 25, 2021.

“We are delighted with the presence of the Ministers of Finance and the Ministers of Housing of the 44 member countries, the African Development Bank, Africa-Re, donors from the EIB, AFD, BOAD , KfW, NCBA, International Bank of Ghana and other key players in the housing and finance sectors, who will work collectively to find pragmatic solutions to the housing crisis in Africa, especially in this context. post-COVID-19 period. As a country, we are committed to welcoming, ”said Ms. Courtès.

Appreciating Mr. Macharia for his great leadership and welcoming Ms. Courtes as new President and Honorable Garwe as new Vice President, Shelter-Afrique General Manager Andrew Chimphondah pledged that the AGM of this year will go beyond finances, not only because of the prevailing situations presented by a global pandemic but because the company will also mark its 40th anniversary.

“In most cultures, 40 is a milestone; the milestones give us the opportunity to congratulate ourselves and to benefit from our achievements. Most importantly, this is the time for us to reflect and consider what will happen next. This is why the theme for this year’s AGM is Four Decades of Affordable Housing Policies in Africa: Projecting the Next Forty Years. Our 40th year will be a year of retrospection. We believe that at the dawn of this new decade and in the face of the realities that this pandemic has highlighted, there is a need to examine the environment for housing policy in Africa. Not only to measure growth, successes and challenges, but above all to forecast the next forty years to shape the policy of our member states and how we approach the provision of large-scale and low-cost housing in Africa ” , said Chimphondah.

Mr. Chimphondah also thanked the members of the Bureau for their handling of the pandemic, and noted that this had enabled the company to record its first profit in five years and to successfully conclude a debt restructuring agreement with international lenders, which marked the effective recovery of the company from its previous difficulties.

Noting the limitations presented by the COVID-19 pandemic on travel and gatherings, Mr Macharia said this year’s AGM will be touted as a hybrid of in-person and virtual participation. Shelter Afrique successfully held its first virtual AGM in 2020 in Nairobi, Kenya.

Another important item on the agenda will be the integration of a new class “B” shareholder and the creation of new opportunities for class “C” shareholders for non-African institutions and private companies wishing to invest. in the company in order to strengthen the capital structure of the company.

“The African Solidarity Fund (ASF) has already expressed interest in joining Shelter-Afrique as a shareholder under the“ B ”class group. At the 40th AGM, we will seek shareholder approval, in which case it will become our 47th shareholder as we strive to integrate the remaining 10 African countries that are not yet members of our great Pan-African Development Finance Institution ” , said Chimphondah.