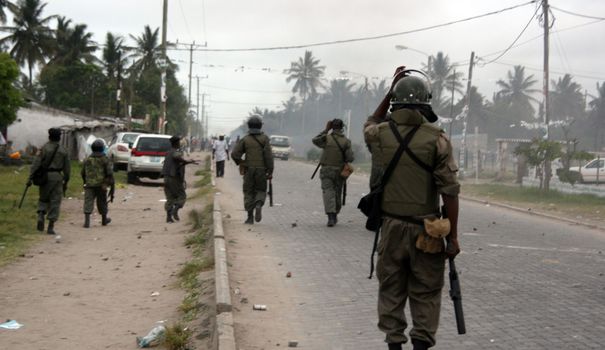 The deterioration of the security situation in the Mozambican province of Cabo Delgado and the carelessness of the central government of Maputo to stem the threat posed by armed groups in this area, the poorest in the country, is raising increasing concern. of the international community.

Since the violent assault at the end of March by two hundred men from the Ahl-al-Sunnah wa al Jamma’ah (ASWJ) group, better known under the name of Ansar Al-Sunna or “Chabab” (the “Young people), on the port city of Palma, located not far from the future site where the French Total was to develop a liquefied gas (LNG) project, the situation is only getting worse.

This group affiliated with the Islamic State (IS), an organization that claimed responsibility for the attack through its new agency Amaq, has been operating in the region since 2000, but its first actions date back to 2017. To date, more than 2,800 civilian victims have been reported. soldiers as well as hundreds of thousands of displaced people. The capture of Palma comes after that of the port of Mocimboa da Praia, in August 2020.

Total was forced to withdraw its staff from the area before announcing, on April 26, the suspension of its project via a statement. “Given the evolution of the security situation in the north of the province of Cabo Delgado, Total confirms the withdrawal of all personnel of the Mozambique LNG project from the Afungi site”, explains the French group on its site . “This situation leads Total, as the operator of the Mozambique LNG project, to declare force majeure.”

Faced with this context, Emmanuel Macron should seize the opportunity of the presence of Mozambican President Filipe Nyusi in Paris, on May 17 and 18, where he is to attend the conference on new forms of development financing, to try to persuade his counterpart to open the country to an international coalition. He will be all the more inclined to push this scenario as the heavyweights of the South African development community (SADC) will be present in the French capital, including the Angolan Joao Lourenço, the Congolese Félix Tshisekedi or the South African Cyril Ramaphosa. . A meeting should be organized on the sidelines of the conference specifically on this issue.

Last November, Emmanuel Macron was one of the first foreign officials to mobilize his European partners to suggest a military response to the insurgency. However, Mozambique has so far objected to the deployment of soldiers on its soil. Cacique of the Mozambique Liberation Front (Frelimo) in power since the end of the civil war in 1994, the head of state re-elected in 2019 has little taste for the culture of external interference. Added to the chronic weakness of the state’s presence in Cabo Delgado is the carelessness of the army itself. Created in 1994, it is experiencing serious tensions within its command between the cadres of Frelimo and those of its brother-enemy, the National Resistance of Mozambique (Renamo), integrated into this new national army. In addition, the Mozambican army is proving to be powerless in the face of this type of new crime. Under-equipped, it sorely lacks intelligence and airborne resources.

President Nyusi has long seemed to ignore the problem. He did not appoint a military command in this area until last January in the person of General Eugénio Ussene Mussa. The latter died a month later. For the time being, Maputo has contented itself with the reinforcement of private military companies (SMP) such as Dyck Advisory Group (DAG). Expiring at the end of April, the contract with this South African company was not renewed. Although she intervened directly in Palma, she was pinned down by Amnesty International for abuses against civilians. The Russian company Wagner, which sent 160 men, revealed its helplessness.

For its part, the United States, which classified the Chababs as a terrorist group last March, has been authorized to pilot training programs for the Mozambican army. A detachment of a dozen instructors from the Special Forces (Green Berets) have been present in the country since the beginning of the year. They have no operational prerogative and train far from the conflict zone. Portugal has sent around sixty trainers. Companies like Paramount also operate in the country.

However, it is difficult to see how Maputo could pull itself out of this terrorist trap on its own without enlarging its military response by resorting to the aid of third states. The lifeline could precisely come from SADC, which fears an extension of the conflict to other countries, led by Tanzania. The existence of South African, Ugandan or even Congolese assailants among the Chababs underlines a progressive Africanization of this group.

An important meeting of the sub-regional organization was to be held on April 29 in Maputo on this subject. This was to work in particular on a report by the Chief of Staff of the SADC standby force, Botswanan General Michael Mukokomani, around the constitution of a force of 3,000 men through three battalions, one brigade. light infantry and a staff composed of 90 officers. Two special forces squadrons are also mentioned. This device is accompanied by maritime and air support. This meeting was, however, officially postponed indefinitely due to the unavailability of Botswana President Mokgweetsi Masisi after a Covid contact case. As for the South African president, he appeared before an anti-corruption commission in his country. The Paris conference should give new impetus to this initiative for the deployment of this rapid force.

Africa: An international conference to revive the economies of the continent