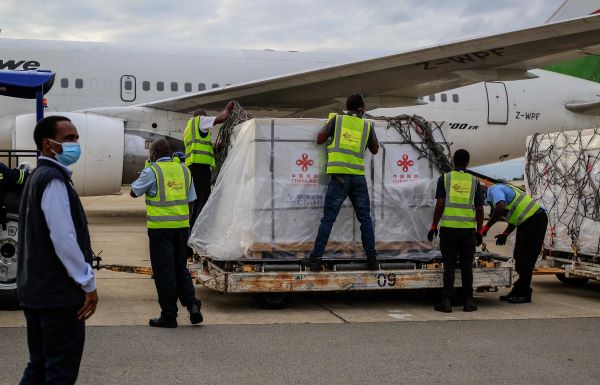 While Europe, including France, remain entangled in the management of the Covid-19 pandemic, China is stepping up to cover Africa with its two vaccines approved by the World Health Organization (WHO) – Sinopharm and SinoVac – as part of a large campaign targeting some 70 developing countries around the world. In recent weeks, some fifteen states on the continent have received several hundred thousand of Sinopharm’s vaccine, which has a protective efficacy of 79.34%. Deliveries take the form of donations, thus serving as a true diplomatic offensive of the Middle Empire.

On March 24, Mauritania received 50,000 doses of this “people’s vaccine” which Beijing uses as a factor in strengthening ties with recipient countries. This operation earned a long statement from the charge d’affaires of the Chinese embassy in Nouakchott, Wang Jian, on the website of the chancellery. Two days later, Angola received the same type of packages enriched with materials. “China is the first country to provide Angola with epidemic prevention support, anti-epidemic material and to share advanced anti-epidemic experience with Angola to help it better cope with the challenge of the epidemic “, Reacted the Angolan Minister of Health, Silvia Lutucuta. Last February President Teodoro Obiang Nguema, vaccinated from a donation of 100,000 doses, praised China as “Equatorial Guinea’s best friend”. 200,000 doses have also made it possible to start a vast vaccination campaign in Senegal. 100,000 doses are expected by the Mauritian authorities in the coming days. In total, around twenty countries were delivered without any compensation, including Congo-Brazzaville, Gabon, Seychelles, Zimbabwe and Mozambique. With 400,000 doses, Niger received the largest quantity.

This aggressive campaign responds to two geopolitical imperatives. First, China intends to strengthen its influence by taking advantage of the primacy of deliveries over other countries in order to gain market share in the health and biotechnology sectors. In several countries, vaccine delivery is accompanied by supplies of equipment (respirators, etc.) but also devices allowing the construction of laboratories or even hospitals. Countries like Morocco have started negotiations to be able to produce the Sinopharm vaccine and export it to other countries on the continent. In addition, this vaccine offers greater logistical advantages as it can be stored in a refrigerator. The one from Pfizer / BioNTech requires freezing. Second, Chinese activism intends to overshadow the Covax initiative. Launched in the spring of 2020, this initiative led by the European Union (EU) must provide, by the end of 2021, up to 600 million doses to Africa, enough to vaccinate 20% of its population. However, logistical problems are currently hampering efficient delivery of doses. While the United States and Europe are still reserving their stocks, China thus offers an alternative to reduce inequalities between industrialized and less developed countries. Many states have already favored it for their order, Beijing having been the first to provide them. Zimbabwe has ordered 1.2 million doses from Chinese firms. Alexandre varel