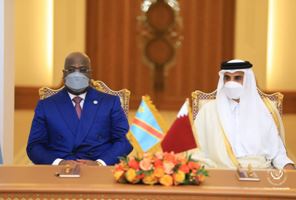 The protection of the investments expected between Qatar and the DRC, the modernization, the development of airport and port infrastructures, the strengthening of the capacities of sectoral experts as well as aeronautical and maritime cooperation, between the DRC and Qatar, constitute the basis of many agreements and memoranda of understanding that the Congolese Minister Marie Tumba Nzeza of Foreign Affairs, and the Qatari Minister of Transport and Communications of Qatar, Jassim Saif Ahmed Al-Sulaiti, signed on March 29, 2021 in Doha, in the presence of President Félix Tshisekedi and the Emir of Qatar, Tamim Ben Hamad Al-Thani.

In infrastructure, the agreements concern the construction and financing of three flagship airports, namely Ndjili and N’Dolo in Kinshasa and Luano in Lubumbashi. They also relate to the modernization of strategic maritime infrastructures such as the ports of Matadi, Kinshasa and Boma, reports the presidency of the DRC.

The other documents signed between the two countries concern the Congolese Post and Telecommunications Company (SCPT), the integration of the company Qatar Airways in a Qatar-DRC partnership project relating to the support of the Congolese State through the partnership. with the Airways Authority (RVA) for the modernization, construction and financing of three flagship airports: N’Djili in Kinshasa, Luano in Lubumbashi and Ndolo (Kinshasa) for business aviation.

DRC: signing of a “major” partnership between AFD and EquityBCDC

[Tribune] The fight against corruption in the DRC: a sector of the future

Bancassurance: agreement between the Agricultural Bank of Egypt and Misr Life Insurance