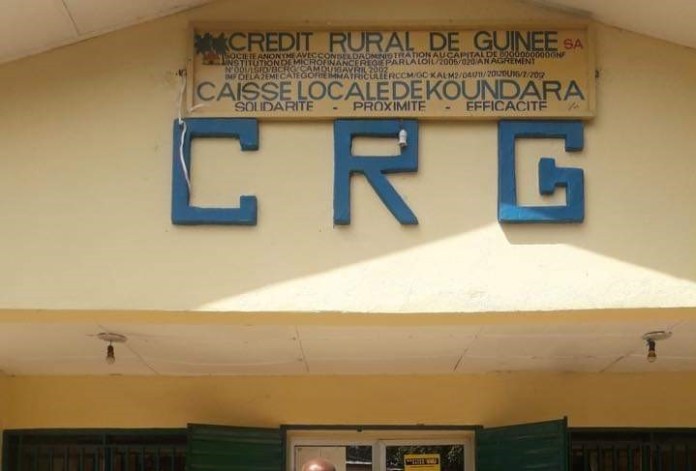 The microfinance sector in Guinea is highly concentrated with 25 microfinance institutions (MFIs), 22 of which are active and significant disparities in terms of market targeting. According to World Bank forecasts, competition is expected to increase in the coming years with the entry into service of new players. Four MFIs outrageously dominate the microfinance sector in Guinea (CRG, Yete Mali, Finadev and Cofina). In 2016, they alone represented 96% of outstanding savings and 87% (84% in 2017) of outstanding loans. The market shares of Crédit rural de Guinée (CRG), which dominates the podium, represented during the same year between 85 and 90% with 39% of deposits and 37% of loans. The progression and arrival of new anonymous microfinance companies is grabbing market share from the institution and the three other fourteenth MFIs that dominate the sector, and are slowly but gradually redistributing the cards on the microfinance market in Guinea. This growing trend is expected, according to the World Bank, to become even more pronounced in the years to come with the entry into service of new MFIs with capital, technical expertise and also targeting the urban small business market.

The CRG, as a pioneer of microfinance in Guinea, took its first steps in 1989 with only two funds on the model of the Grameen Bank, of Bangladesh, thus passing a decade later, from the project to the institution. She experienced a progressive social construction, which allowed her to capitalize on a long experience and to adapt her interventions according to the context and environment. Thus allowing it to survive several shocks and a constantly evolving socio-political and economic environment. To understand the secret of this pioneering MFI, with solid fundamentals which laid the foundations of Guinean microfinance and to unravel the secret of its growth (20% annually, before the outbreak of the 2013-14 Ebola epidemic), he must go back in time to the beginning of the Second Republic.

The early beginnings of rural microfinance in Guinea

Guinea is in a disastrous economic and financial situation at the death of Sékou Touré (1984). The infrastructures (roads, communication, etc.) are practically destroyed and the institutions (State services, Justice) hardly function any more. The entire Guinean banking sector is bankrupt, there is a significant gap between the official value of the currency and the real price. The few private banks that appeared in the late 1980s remained confined to Conakry and two or three towns in the interior. It was in this context that the Ministry of Rural Development commissioned a study in 1987 on “agricultural credit and the financing of agriculture”. This study, carried out by IRAM, recommends, following a detailed analysis of the socio-economic environment and the needs expressed by the populations, the establishment of a support project for the credit components of rural development projects and experimentation with an alternative approach. In this logic, as early as 1989, in experimental form in Koundara and Télimélé (Lower Guinea), a credit approach inspired by the Grameen Bank to meet, on the one hand, the needs of the populations and, on the other hand. part, to the question of guarantee and viability. The purpose of this development project was to grant loans to economically disadvantaged populations, to get them to repay with bearable interest rates and to guarantee the sustainability of the system. Following the encouraging results recorded, the CRG will proceed with a gradual geographical and technical extension. With, at the end of 2001, more than 110,000 associates distributed among 85 local credit unions, the CRG became in November 2001 an institution specializing in microfinance, the basic principle of which is the effective participation of all the actors.

Extension and diversification: the main development phases of the CRG

For the past ten years, Crédit rural de Guinée has been offering local financial services to the most disadvantaged rural and urban Guinean populations who are furthest from traditional banking structures. During this decade, it went through four main phases, depending on the evolution of its objectives.

The first phase runs from 1988 to 1990: its aim was to experiment and formulate a methodology for the distribution and recovery of credits adapted to the situation of the populations. To prevent the more advantaged sections of society from taking over the young credit structure, certain social categories are excluded (civil servants, large traders) and credits are capped. Solidarity groups of five to ten people will constitute the basic principles of the CRG and the guarantors of the viability of the system. During this experimental phase, the CRG has nine funds distributed in Middle, Lower and Upper Guinea.

Following the conclusive results of the experimental phase, the second phase (1991-1993) will over three years extend the achievements of the first phase into 25 new funds and in all regions of the country. This is the phase of redefining the objectives and developing solidarity-based agricultural and rural credit according to the needs expressed by the populations. During this second phase, reflection on the institutionalization of the CRG will begin in 1993. The CRG will proceed in 1990 with the establishment of the first monitoring committees, bodies elected by the group leaders at the administrative district level. The role of these committees is to compensate for the lack of knowledge of indigenous associates by “foreign” agents (from other regions). Thus, the function of elected officials is, on the one hand, to participate in the selection of partners and, on the other hand, to help agents in claiming funds from latecomers.

The third phase (1994–1998) is that of the consolidation of the objectives through a reflection on the financial balance of the system, a “concerted” development with the Crédit Mutuel de Guinée (CMG3) and the reflection on its inclusion in the law. banking. For questions related to the socio-economic, cultural and political environment, but also by the accumulation of internal difficulties, the network is developing significantly but the first difficulties appear at the level of delays (fictitious groups, political interference , etc.,) and the misappropriation of certain agents, in particular, according to the Committee for Exchanges, Reflections and Information on Credit Savings Systems (CERISE).

The period from October 1998 to 2001 corresponds to the fourth phase. Its main objective is to bring the CRG to financial viability while finalizing, after the refusal by the partners of the plan drawn up in the third phase (Foundation), a new legal status. The purpose of this transitional phase is to gain management autonomy accompanying the institutionalization of the network. In November 2001, the CRG became a financial institution in the form of a public limited company approved by the Central Bank.

The successive passage of the CRG from the “Grameen Bank” system to mutualism and then to “joint management” characterizes the evolutionary DNA of the CRG which always manages to adapt and reinvent itself.