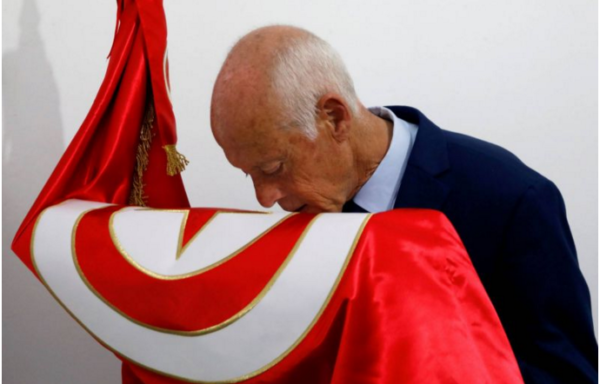 September 15, 2019, almost a century ago. The Tunisian presidential candidate, the rigorous Kaïs Saïed kisses the Tunisian flag in Tunis. A symbolic gesture that galvanized conservative circles who saw in this champion of the classic maple tree a new Raïs of modern times.

After having spent several weeks in the “zero cases” box, the most northerly of African countries was overtaken by the second wave. Tunisia has decreed a curfew in mid-October, now extended until March 31, the health ministry announced on Sunday (December 6th). However, there will be no return to containment, ruled out because of the economic and social cost.

Among the measures taken, note also the closure of cafes at 7:00 p.m. against 4:00 p.m. previously and the restriction to 30 people for private parties and funerals. Wearing a protective mask remains compulsory in all public and private spaces. In addition, travelers arriving in Tunisia for a period not exceeding 5 days should present a negative PCR test carried out within 72 hours before boarding.

After strict and early containment from March to June, Tunisia had succeeded in containing the pandemic, but should see its GDP fall by 7% in 2020, according to IMF projections. The country of 11 million people passed the 100,000 confirmed case mark on Thursday with 102,991 cases registered at last count, as hospitals struggled to cope with the influx of patients. Several dozen deaths are recorded every day, with 3,526 officially recorded since the epidemic began in the country in March. .