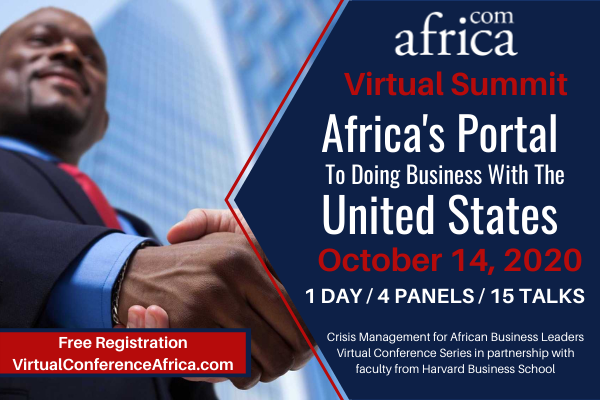 Africa.com is convening thousands of leaders of African businesses, and the highest ranks of U.S. agencies that support African business, to present opportunities for growth through trade, investment and technical assistance. This virtual summit, Africa’s Portal to Doing Business with the United States, will take place virtually on October 14, 2020.

The virtual summit, unprecedented in terms of scale, breadth and depth, will convene thousands of c-suite executives and decision-makers at African businesses, large and small, from across the continent. Designed specifically to serve African business leaders, this Virtual Summit is a portal, a one-stop-shop, into the United States Government’s resources at the highest levels. The summit is structured as four sessions taking place in one day.

The Summit kicks off with keynote remarks by the highest ranking U.S. government official responsible for relations with Africa, U.S. Assistant Secretary of State for African Affairs, The Honorable Tibor Nagy. Then, the Chairman of the U.S. President’s Advisory Council on Doing Business in Africa (President and CEO of GE Africa) Farid Fezoua, will deliver keynote remarks from the private sector perspective.

Following the keynote remarks will be a panel discussion featuring the Chief Operating Officer of Prosper Africa, a new U.S. Government initiative that brings together the resources of over 17 U.S. Government agencies to connect U.S. and African businesses with new buyers, suppliers, and investment opportunities. Joining this panel are the ‘Africa heads’ of some of the key U.S. Government agencies that do business with Africa, International Development Finance Corporation (formerly OPIC); The Export/Import Bank; USAID; and the U.S. Africa Development Foundation.

The third session of the summit is a panel of very senior African business leaders who have done business with the U.S., who will provide their perspectives on their experiences, and guidance to those who seek to follow their footsteps.

The fourth session of the summit is a panel of U.S. Ambassadors to several key African countries who will speak about the resources available specifically in their markets to support African businesses.

For decades, The United States Government has funded a number of agencies and platforms to support African companies to do business with both the U.S. Government itself, and with the U.S. private sector. This is a unique opportunity for African business leaders to hear from these resources together, at one time, in one place, and to hear from other African business leaders themselves who have engaged with the United States.