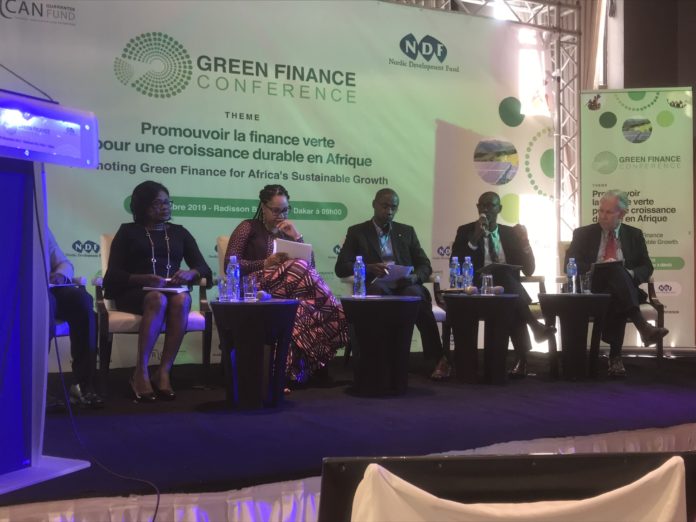 Green finance was on the agenda of the international conference organized in Dakar on December 3, 2019 by African Guarantee Fund (AGF) and the Nordic Development Fund (NDF). In front of all the local financial ecosystem represented by the banks, the guarantee funds, the institutions of development and the State in its different dismembrements including the Ministry of the Economy, that of the Environment, the National Fund of the sovereign investments ( FONSIS) and the Guarantee Fund for Priority Investments, Félix Bikpo, Managing Director of the AGF fund, recalled the huge funding gap for African SMEs: “150 billion dollars with an increase tending to 300 billion dollars”.

The new possibilities introduced by climate finance can help to reduce this gap, which concerns 98% of the Senegalese and African entrepreneurial fabric.

From the outset, there was talk of coordinating the roles of the various players in green finance, ranging from multilateral institutions to development institutions and from these to the states, commercial banks and ultimately companies. If the opportunities of green finance are numerous, they need an incentive framework to develop, says Pierre Maspoli of the French Development Agency (AFD).

Senegal seems to be preparing with the current state of things, the preparation of a regulatory framework for emissions of Green bonds, said Yaya Bary, economist in service at the Directorate of Green Financing and Partnerships at the Ministry of Finance. ‘Environment. Dakar is also working on the structuring of a national climate fund, adds Barry.

It must be said, as Angela Luh Sy, UN Environment chief for West Africa, pointed out, until now only Kenya, South Africa and Nigeria have issued green bonds. Senegal will join this club closed in the coming months.

It remains to be seen whether the local banking system, with, recalls Ibrahima Sakho, general coordinator of the institutional change of Fongip, 607 billion CFA francs of unsatisfied demand for funding, perceives all the possibilities offered by green finance. Apparently, the initiatives exist even if they do not abound. At the regional level, AGF guarantees green projects up to 75% of bank financing while allowing a 29% reduction in the guarantee cost dedicated to this type of project compared to the traditional project. “Coordination of the actors is necessary to generate the maximum impact,” suggests Ms. Luh, who cites the Kenyan case where the 15 DFIs present are organized in a platform working with the state, “which has the gift to generate more than impact and to avoid the dispersion of forces “.

In the face of climate challenges, with West Coast erosion and the threat to tourism, public funding alone is not enough to develop mitigation and adaptation programs. It will be necessary for the private sector to commit itself in an accelerated manner in the light of data on the consequences of global warming. As an expert at the conference recalls, keeping it at 2% of global warming can make Africa lose 17% of its agricultural GDP and dry up 100 million hectares of arable land.