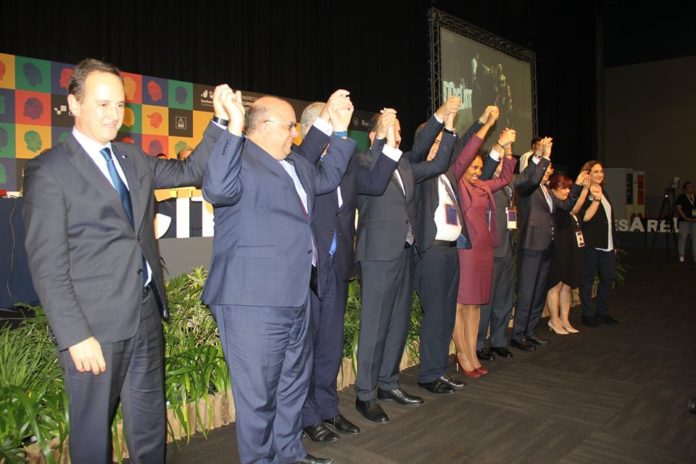 Dr. Mohamed Boudra, Mayor of Al Hoceima (Morocco), candidate of Africa, was elected President of United Cities and Local Governments (UCLG) at the World Council of the organization held on November 15, 2019 in Durban (Africa) from South). The first round gave as results: Dr. Boudra, first with 100 votes; followed by Mr Ilsur Metshin, Mayor of Kazan in Russia with 66 votes, and in third place Mr Fernando Medina, Mayor of Lisbon in Portugal with 55 votes, which gave Mr Boudra and Mr Meltshin qualified for the second round scheduled for November 15, 2019, during which each candidate had to present a ticket including in addition to himself, 5 co-presidents chosen among the 8 candidates selected for this position; and two Treasurers chosen from the 4 candidates selected for this position.

The second round, scheduled to take place on November 15, 2019, did not take place, as the two candidates agreed to form a consensual presidential team in which all UCLG sections are represented, including the vice-presidents appointed by section. The new president of UCLG presented the team with whom he intends to lead the world organization during his three-year term (2019-2022). This team is composed as follows:

Moroccan Mohamed Boudra succeeds South African Parks Tau, who served as UCLG President from 2016 to 2019. With the election of Mohamed Boudra, Africa begins its second consecutive term as President of UCLG for the first time. period 2019-2022.

After the installation of the new presidential team Mr. Boudra congratulated his predecessor as well as the entire outgoing presidential team for the work done in the service of the organization. On behalf of outgoing President Parks Tau, he said, “We have not lost a Speaker, because you will continue to be our President. But we have won a minister who will defend the local authorities. Thanks to South Africa for this congress I can name the Union Congress. Of the union of all sections of UCLG “.

In his speech at the inauguration of his term as President of UCLG, Mr. Mohamed Boudra said:

“Thank you to my peers for their trust and for allowing me to be elected President of UCLG. The debates and exchanges were exciting and informative. I am solemnly committed to completing my commitments to raise our organization to the highest level. We came here together with the concern of safeguarding and strengthening the unity and strengthening of our global organization and we succeeded. ”

African delegates expressed their satisfaction to see the continent hold the reins of the world organization.

“This is a total satisfaction especially since the porting of this candidacy began since the meeting of the executive committee in Cairo in June before continuing in Libreville in July 2019. The choice of the candidate of Africa has was done following a very democratic process and everyone was behind Mohamed Boudra because we thought he was the best candidate for Africa. Today the result is there, Mr. Boudra is elected president of UCLG World. Africa is honored, Gabon is honored, “said Léandre Nzué, President of UCLG Africa.

“Africa remains at the helm of the world organization. Now we must remain dedicated and committed to further develop our global organization. The world is watching us and we have to come up with viable solutions, and we are ready for that, “added Ms Thembisile Nkadimeng, elected Co-Chair of UCLG.

“I express my satisfaction that the local elected representatives of the world have kept the values ​​of our organization. The values ​​of making an election without breaking, an election without a break. We are also happy to keep this second mandate as an African and to ensure that our global institution remains a solid institution, “said Armand Béouindé, Mayor of Ouagadougou, elected UCLG Vice-President for Africa.

The next UCLG World Congress will be held in 2022 in the city of Daejeon in South Korea.

Interest rate risk: in 18 months, the big bang in Morocco

Morocco-listed companies: the transfer window for auditors has begun!

A comparator of bank rates soon in Morocco

Attijariwafa bank Europe is mobilizing to support the return of MRE by facilitating money transfers: funds available in Morocco in just 2 hours!