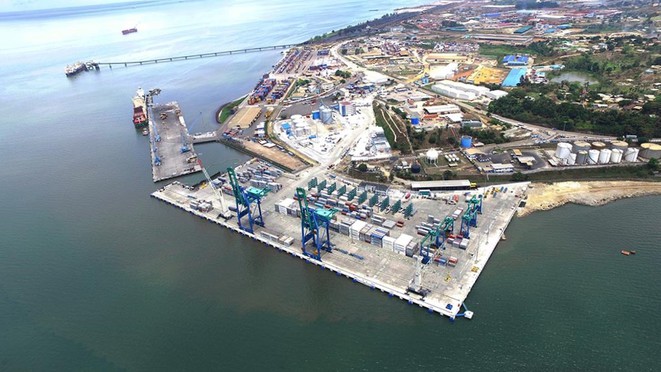 PIDG company, the Emerging Africa Infrastructure Fund (EAIF) today, 5 August, announced that it has arranged the long-term debt finance for a €305 million new port development by Gabon Special Economic Zone Ports (GSEZ Ports) at Owendo, Gabon. In addition to its sole mandated lead arranger role, EAIF is lending the company €40 million over 15 years, on a first ranked basis. GSEZ Ports is EAIF’s first project in Gabon. It is the largest industrial-scale infrastructure public private partnership yet seen in the country. Financial close was achieved on 26 July.

The African Development Bank (AfDB), which led the structuring of the finance, is also lending €40 million. The new funds will refinance the project, releasing money for the largest shareholder to reinvest in other infrastructure projects in Africa, some in Gabon. 75% of the capital for the port project is shareholder equity.

GSEZ Ports has been awarded a 30-year concession to build and operate the new port.

Expanding Gabon’s port capacity at Owendo and developing the special economic zone (SEZ)  are key elements in the country’s drive to diversify its economy, reduce logistics costs for Gabon businesses and expand the non-oil sectors. GSEZ is also the developer of the Gabon Special Enterprise Zone and allied facilities that has attracted 123 businesses from 18 countries.

The combination of Gabon’s diversification strategy and the SEZ is forecast to see growth rise to between 4% and 5% over the medium term. GDP in 2018 was 1.2% (source World Bank*).

Supporting the development of SEZs is a strategic priority for PIDG. SEZs have the benefit of reliable infrastructure and services, often attract clusters of companies in sectoral supply chains and stimulate local and foreign direct investment. SEZs help improve employment growth and economic sustainability. PIDG says that SEZs are ideal for a blended finance approach, where public and private capital can mobilise long term capital for investment infrastructure that meets the needs of growing businesses.

“We are proud to be involved in Gabon’s drive to strengthen its industrial base, build employment and skills and create a more broadly-based economy. GSEZ Ports is a powerful example of public and private capital working in partnership to create a development that will benefit Gabon for decades to come.”

“The Emerging Africa Infrastructure Fund immediately saw the strategic economic development potential for Gabon of our new port. GSEZ Ports has benefitted from the expertise, experience and skill of EAIF and from the PIDG focus on special enterprise zones. Our state-of-the-art port has been angular and critical for Gabon’s economy during the last two years and this new funding will help us elevate it even further

Owendo’s existing port facilities for general cargo had reached maximum capacity. GSEZ Port’s new infrastructure adds an additional 4 million tonnes of capacity, doubling the port’s capability.  The new infrastructure will handle general bulk and liquid cargoes and container traffic. A new 500 metre-long main berth built to accommodate GSEZ Ports is twice as long as the original berth. In addition to the container quay, the total length of the berth is 800 metres. The berth has been dredged to a depth of 14 metres, allowing it to take larger ships than in the past. Ship owners will benefit from the deeper water to berth larger ships and the investment in modern cargo handling equipment will speed up turnaround.

The enlarged port was certified completed in June 2019 and had involved 1,800 construction workers, mainly from Gabon. The investment by GSEZ Ports will see the creation of an additional 380 permanent port operations jobs.

“EAIF has been able to do business where local finance institutions are not yet in a position to meet the large scale needs of infrastructure developers. As the economy of Gabon grows and diversifies, local banks should see the success of the GZEP Ports development and evolve products and services tailored to satisfying local need for long-term capital.”

Advisers to the Lenders

Advisers to the borrowers:

The Emerging Africa Infrastructure Fund provides a variety of debt products to infrastructure projects promoted mainly by private sector businesses in sub-Saharan Africa. Part of PIDG, EAIF is funded by the governments of the United Kingdom, The Netherlands, Switzerland, and Sweden. It raises its debt capital from public and private sources, including Allianz, the global insurance and financial services company; Standard Chartered Bank; the African Development Bank; the German development finance institution, KFW, and FMO, the Dutch development bank. The Fund helps create the infrastructure framework that is essential to sustained economic stability; business confidence, job creation and poverty reduction.  It has to date supported 75  infrastructure projects across eight sectors in 22 sub-Saharan African countries. EAIF is managed by Investec Asset Management.