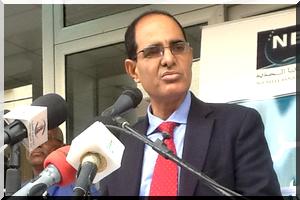 In cash stress for a few weeks, the New Bank of Mauritania (NBM) has reached an agreement with the Central Bank (BCM). The agreement in question deals with the clearance of the State’s arrears. A timetable has been set in this direction, which would allow the NBM to return to its funds.

In the meantime, the BCM has imposed temporary withdrawal ceilings of up to 1 million old Ouguiyas per week for corporate clients and 400,000 UM for individuals.
Financial Afrik’s attempts to join the management teams have been futile. However, information is generally informed, the NBM is not excluded from the compensation as tended to believe some rumors. The same rumors had announced the escape of the CEO of the NBM, Abdel Baghi Ould Ahmed Bouha, in a private stay of a few days in Paris. The banker who was not summoned by the Economic Brigade contrary to the allegations of a certain press, will return to Nouakchott in a few days.
In the meantime, it must be said, Abdoul Baghy must find investors to fill the departure of businessmen Zein El Abidine and Lemar Ould Weddady of the tour de table of his bank. To be continued.