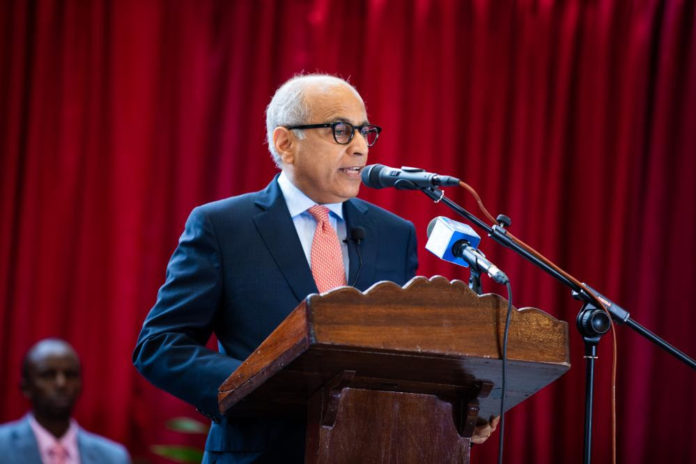 One key mission Aga Khan Academy Mombasa is to create ethical leaders working towards a shared goal of sustainable development to improve the lives of those living not only in Kenya, but also across the globe. The Academy places great importance on identifying and nurturing exceptional young people from a wide range of nationalities and religious, ethnic and socio-economic backgrounds, thus creating a learning community that is exceptionally diverse, open-minded, culturally-rooted and driven to make a positive impact on their communities and the world.

In the words of its founder, His Highness the Aga Khan, at the inauguration ceremony of the Aga Khan Academy Mombasa (2003), « As the young men and women from this Aga Khan Academy, and over time from its sister schools, grow and assume leadership in their societies, it is my hope that it will be members of this new generation who, driven by their own wide knowledge and inspiration, will change their societies; that they will gradually replace many of the external forces that appear, and sometimes seek, to control our destinies. These young men and women, I am sure, will become leaders in the governments and the institutions of civil society in their own countries, in international organisations and in all those institutions, academic, economic and artistic that create positive change in our world. »

The Guest Speaker at the ceremony was well-known Kenyan singer and song-writer Eric Wainaina. During his speech, Eric encouraged the graduates to create their own paths for the future, regardless if it went against the norm.
« [Life is] too short for you to miss having the impact that God put you on this planet for. Be adventurous, be bold and don’t take no for an answer. And parents, let’s throw our kids in the cockpit, and let’s say to them ‘let’s fly.’ »
The Class of 2019 were offered admissions to attend prestigious schools around the world, including the London School of Economics and Political Science, Vanderbilt University, University of California, Los Angeles (UCLA), Northwestern University in Qatar, Johns Hopkins University to name but a few.

Alqaim Lalani (Class of 2019), who will attend Columbia University as a prestigious ‘Kluge Scholar’ in September 2019 to study Economics and Political Science, was recently nominated as one of the Top 50 Most Influential Young Tanzanians in the field of Social Enterprise and Philanthropy. He achieved this honour in recognition of his work to support the treatment of young cancer patients in Tanzania. Alqaim said the Academy « is unlike any other. Students at the Academy are not here to simply attain an education, but also apply it in the real-world setting and serve their communities thereafter. »

Our Alumni have ventured to different parts of the world and are having an impact in their chosen fields. Below are two examples of Alumni excelling at what they love:
Inaara Gangji (Class of 2017), a rising junior at Northwestern University in Qatar majoring in Journalism, Media and Integrated Marketing Communications, has been succeeding in her field – recently having a piece of hers featured as a top story on Al Jazeera.

« Joining the Academy challenged my perceptions and taught me to believe that I’m capable of doing the extraordinary. I first had the opportunity to explore the field of journalism through an extracurricular club, even though my career goals were different at the time. Journalism has given me the platform to make a change by informing and by giving a voice to underreported stories. I hope to keep telling such stories and inspiring young minds to take on careers in the liberal arts as they are so crucial to fostering an inclusive future for our world. »

Ham Serunjogi (Class of 2012), who studied at Grinell College, worked with major tech startups, like Facebook, and recently co-founded Chipper Cash, which is now the largest mobile cross-border money transfer platform in Africa. Ham says that
« Responsible capitalism seems to be in short supply today, and it seems to many that a lot of business leaders seem to ignore the social responsibility their enterprises have in our society. As a graduate of The Aga Khan Academy Mombasa, the importance of having a net positive impact – both socially and economically – on my local community and society in general is a value that was instilled in the lessons I learned while I was there, and one that I often fall back on as I run and grow my company. »

These are but a few examples that provide a glowing testament to the transformation of the Academy’s vision into reality: creating ethical, home-grown leaders that are both culturally-rooted and internationally-minded, perfectly placed to change the world we live in.
We would like to take this opportunity to thank our sponsors and partners who have continuously supported our mission in various capacities since the opening of the Aga Khan Academy Mombasa in 2003.

About the Aga Khan Academy Mombasa
The Aga Khan Academy Mombasa, a programme of the Aga Khan Development Network, is the first of a network of 18 planned academies to be established across Africa, Europe, South and Central Asia, and the Middle East to provide a world-class education to exceptional students who possess strong leadership potential. Admission to the Academy is based on merit, and financial aid is available to ensure access for students with demonstrated need. Pluralism and ethics are core values of the educational programme at the Aga Khan Academy, and the student body reflects the full diversity of East Africa, including students from all socio-economic backgrounds. The Aga Khan Academy Mombasa is an International Baccalaureate (IB) World School, offering an IB curriculum that is locally rooted and globally relevant. Academy graduates consistently earn places and scholarships at the world’s top universities. In December 2018, the Academy marked 15 years since its founding.