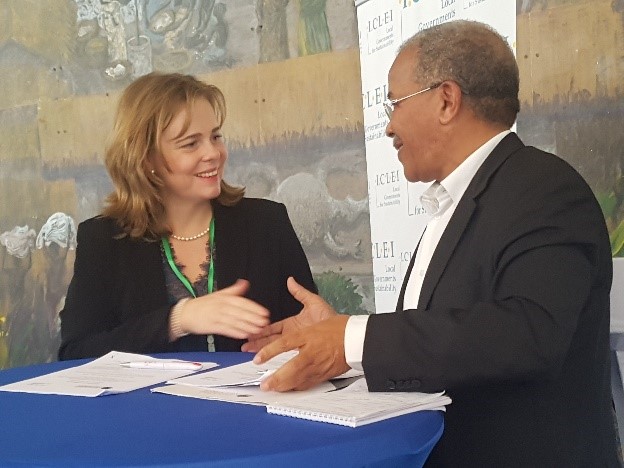 ACCRA, Ghana. 18 March marked the start of structured dialogue around Nationally Determined Contributions (NDCs) at Africa Climate Week hosted by the Ghana Government. Delegates from all over the world gathered in Accra to, “discuss climate change actions and to strengthen stakeholders’ engagement in key sectors including energy, agriculture and human settlements. This very important event highlights Africa’s commitment to the implementation of NDCs in the lead up to the United Nations Summit for Climate in New York later in the year. The United Cities and Local Governments of Africa’s (UCLG Africa) Climate Task Force are playing a critical role during Africa Climate Week where UNFCCC asked the Task Force to co-ordinate and lead on Policy Block 2 promoting Cities and Local Action. In this context the structure is a perfect platform of exchange on the common challenges and opportunities faced by all African stakeholders. Building strong strategic partnerships is at the heart of The Climate Task Force, that also hosts the Covenant of Mayors for Sub Sahara Africa’s (CoM SSA) ‘Help Desk’ based in UCLG Africa’s Regional Office in Accra. With the recent appointment of the Mayor of Accra on to the Executive Board of the Global Covenant of Mayors, Africa Climate Week provides a great opportunity to cement Accra as a strategic climate hub and bring cities and local governments into the process of the Paris Agreement.

Day 2 – Tuesday, 19 March saw the launch of a new strategic partnership agreement between ICLEI-Local Governments for Sustainability-Africa (ICLEI Africa), and United Cities and Local Governments of Africa (UCLG Africa), where they cemented their partnership with the signing of a Memorandum of Agreement at the ‘Pitch Hub’, during the United Nations Climate Week in Accra, Ghana. The Memorandum of Agreement strengthens an existing collaboration to accelerate the implementation of global and African development goals at subnational level in Africa. This new partnership is fundamental within the Framework of the UCLG Africa Climate Task Force and brings together all interested parties to strengthen and empower subnational and local governments to play a key role in the climate change and sustainability agenda. UCLG Africa providing political advocacy and the voice of Local Africa which is backed by the technical support of ICLEI – Africa.

The collaboration between ICLEI Africa and UCLG Africa will come on the heels of a side event at the Climate Week, led by the UCLG Africa Climate Task Force, to facilitate an agreement between states and local authorities for the territorialization of Nationally Determined Contributions (NDCs). On Thursday 21st March in Committee Room 1 a session, led by the Secretary General Jean-Pierre Elong Mbassi, will facilitate a roundtable discussion and a Davos style structured dialogue with Ministers and Mayors including the Hon. Hajia Alima Mahama, Minister For Local Government & Rural Development of GHANA; and Mr. Mohammed Adjei Sowah, Mayor of Accra. Partners, CoM SSA and ICLEI Africa, will illustrate how African Mayors can properly understand their roles and responsibilities in taking action on climate change issues, as well as how to access technical support for the development of climate actions at a local level. Such robust partnerships within countries and internationally also provides a mechanism for stakeholders to share experiences and data on climate change issues and action in Africa. This session will be Followed by a Press Briefing on Cities and Local Action at 13.30 – 14.00 with the Secretary General, UCLG Africa Mr Elong-Mbassi, the Minister of Local Government and Rural Development, and the Mayor of Accra, in Committee Room 1.

This bold step to deepen the existing partnership between UCLG Africa and ICLEI Africa, in further support of local action to implement the NDCs, strongly resonates with the strategy and mandate of the Covenant of Mayors in Sub-Saharan Africa that provides much needed access to practical support for cities across the continent.