From our special envoy to Tsaghkadzor, Antoine Lawson

More than 270 participants, members of the International Union of Francophone Press (UPF), from 40 countries, are in conclave from 9 to 12 October in Tsaghkadzor, a town located about sixty kilometers from Yerevan, the Armenian capital, on the occasion of the 47th international meeting of the corporatist organization.

Armenian UPF Section President and UPF International Treasurer Zara Nazarian, who worked for the success of this meeting on « Media and Migration », thanked participants at this meeting. Before recalling that they « coincide with the Summit of La Francophonie », whose theme is « Living together ».

Open since Tuesday, October 9, the foundations of the UPF are held in a context marked by a « wind of renewal, » she said. Indeed, Zara Nazarian explains, « they take place in a country that has just experienced a crucial stage in its history; a revolution commonly known as the Velvet Revolution. Which means that Armenia has turned the page of almost thirty years of a political system become obsolete and, thus, braking the development of the country. The Armenian people had the courage and the intelligence to make this change in a peaceful way (…) « .

According to Senegalese journalist Madiambal Diagne, reappointed Wednesday at the head of the Office of corporatist organization, a lot of efforts have been made to go to the foot of Mount Ararat (emblem of Armenia, located in the east of the country) . « We worked hard on it. Many have been the difficulties to meet the conditions of an organization according to the new standards of quality welcome that is required by the UPF, « he said.

Returning to the theme of the meeting, Mr. Diagne considers that we need to feed the reflection by looking more closely at how the media approach and deal with migration. « It is important for the media to take up this issue, especially since media men and women are, by necessity, important actors in the processing of migration-related information, but are also many parts of the world, faced with the need to leave their country to ensure their safety not to say their survival, « he said.

It should be noted that the United Arab Emirates and the Government of Armenia, as well as the International Organization of La Francophonie (IOF) and the United Nations Organization for Science and Culture (UNESCO), have made the organization possible. of these seats in Armenian soil.

Between East and West

Armenia is a country of three million inhabitants located at 1800 m above sea level, in the South Caucasus, between Europe and Asia with an area of ​​29 800 km². It has land borders with Turkey to the west, Georgia to the north, Azerbaijan to the east and Iran to the south.

Empire over the centuries, it is the first country in the world to have officially adopted Christianity as a state religion (in 301). It has been dominated by different Empires over the centuries (Hellenic, Roman, Byzantine, Arabic, Ottoman, Russian).

In 1920, Armenia became a Republic forming part of the Union of Soviet Socialist Republics (USSR). It gained independence on 21 September 1991, but is not yet part of the European Union.

In addition, the country has a rich architectural and cultural heritage, many of which are classified World Heritage of Unesco: churches of the seventh or eighth century, monasteries of the ninth or tenth century and khachkars (carved crosses). Its capital, Yerevan, is one of the oldest cities in the world and the largest city in the country. 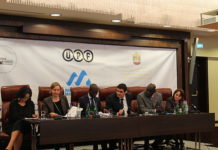 End of the 47th meeting of the UPF in Armenia