Over the past decade, the Democratic Republic of Congo has embarked on a series of key steps to move closer to OHADA, improve its business climate and bring the private sector to the fore, the engine of inclusive economic growth. In this interview, Kabange Numbi Mukwampa, Minister of Planning and Renovation of the city, talks about major reforms.

Today, the Democratic Republic of Congo is totally dependent on its raw materials. Unfortunately, this is not enough to bring about sustainable economic growth. How does your country intend to break the heavy reliance on the mining sector?

Indeed, the list of mineral wealth in the Democratic Republic of Congo is as wide as the country itself, the second largest in the continent. The DRC is full of cobalt, copper, iron, gold, silver, zinc, manganese, tin, germanium, radium, diamond … It is true that the extractive sector represents 97.5% of Congo’s export earnings, 24.7% of current government revenue and 20.9% of GDP. It is true that a source of income strongly linked to raw materials is not enough to bring about sustainable economic development, and we are fully aware of this. That is why the government has been reforming for several years. The objective is clear: to make the emergence of the country a concrete reality for all Congolese citizens by 2030.

To achieve this goal, the State has taken strong measures to attract investors and entrepreneurs, whether Congolese or foreign. Because we believe that emergence, to be sustainable, must be based on a private sector that acts as a powerful driver of inclusive economic growth. And the development of the private sector can only be done in a climate of trust.

In the DRC there is an agency dedicated to investments, the National Agency for the Promotion of Investments (ANAPI). Did this agency prove itself? What role will it play in this reform movement?

We work hand in hand with ANAPI. The most convincing action carried out is, in our opinion, the creation, in 2014, of the Single Window of Business Creation. The first results are starting to be at the rendezvous. It took almost 3 months in 2013 to start a business. With the one-stop shop, this time has been shortened drastically: Today, the creation of a company is done in just 3 days.

Thus, the DRC has a good position on this key indicator of the calculation of the « Doing Business » index of measurement of the business climate established each year by the World Bank. Continuing growth on this indicator for several years, DR Congo is ranked 62nd in all the classified countries. The acceleration and facilitation of procedures has also resulted in a reduction in the number of days required for transfers of ownership, which is now considerably lower than the average for sub-Saharan countries: it is 38 days in the DRC, compared with an average of 60 in the DRC. region.

Another key indicator of the business climate is the building permit – the number of procedures to be completed, currently 12, is identical to the average for high-income OECD countries, and the lead-time the latter (122) is faster than the African average (147.5).

What other key measures should help achieve this coveted goal of inclusive economic growth?

The Democratic Republic of Congo did not rely solely on the actions of ANAPI. At the same time, the country has worked to bring Congolese legal procedures closer to those in force in most of the sub-Saharan countries that are members of the Organization for the Harmonization of Business Law in Africa (OHADA). And since 2012, the country is one of the 17 Francophone and Lusophone African countries of OHADA. Harmonization of business law ensures legal and judicial certainty for investors and businesses at the level of its Member States. The organization is a real bulwark against the bursting of business law, the isolation of States parties; it promotes the creation of a legal space conducive to generating a viable and integrated economic space. Congo has also opted for transparency: almost all the contracts signed by the government are now accessible to the public. The DRC participates in the Extractive Industries Transparency Initiative (EITI) and publishes regular reports on natural resource revenues in this framework.

Have these different measures produced already visible results? What do you think are the avenues for improving economic policy in the country?

For the future of the Democratic Republic of Congo and its economy, we are fully aware that there are still reforms to be finalized. But efforts to attract investors, national and international, are beginning to bear fruit. Since 2010, the Democratic Republic of Congo has posted an average growth of 7%. After a decline in the last two years, the recovery is confirmed in 2018. The rise in copper and iron prices boosted production, and, by a positive impact, the activities of the mining and manufacturing, construction and construction industries. trade. We are also seeing significant progress in other areas. In terms of inclusion and gender for example, where data from the World Bank show the perfect equality of treatment between men and women by the Congolese administration. There is still work to be done, other actions need to be taken but today we are confident and we know that our country has become a favorable environment for business development. 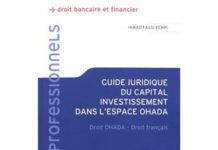 Apostrophe: a new book on private equity in the Ohada space