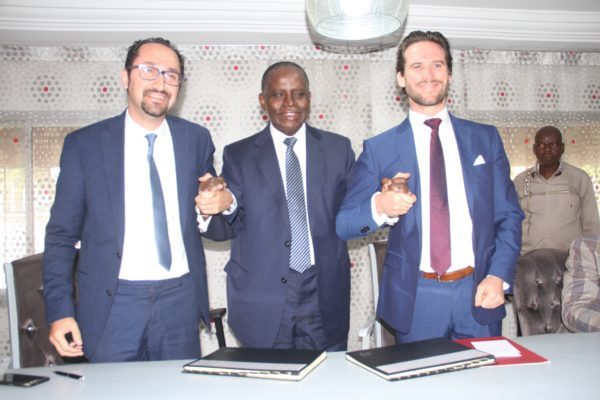 Palm Hospitality Africa, a subsidiary of the Palmeraie Développement Group, and the Plateau City Council, are launching the Abidjan Plateau hotel and announcing that they have entrusted Radisson Hotel Group, a world leader in high-end business hotels, with management. A management agreement was signed, in this sense, Monday, June 25 in Abidjan.

advertisement
You can close Ad in 3s
The hotel complex, whose opening is scheduled for 2021, is designed to meet the City Council’s desire to provide a quality hotel infrastructure for regional and international business customers. To this end, it offers all the conveniences and benefits from the Palmeraie Développement group’s expertise in hotel development and asset management.

The complex will require an investment of 16.5 billion CFA francs (more than 25 million euros) for a total constructed area of ​​17,555 square meters.

Abidjan is a major capital in Africa and has the largest business center in French-speaking Africa. The Radisson Hotel & Apartments Abidjan Plateau will be located on the Boulevard de la Republique, in the heart of the Plateau.

“Through this investment of Palm Hospitality Africa, we are deploying the development vision of the Palmeraie group in business hotels in Africa. This vision starts with an exemplary partnership with the Abidjan Plateau Municipality, which will enable us to set up a reference hotel unit for our group and for Côte d’Ivoire, on an exceptional site. As such, Côte d’Ivoire is a fundamental platform for our regional development in this sector where it has a favorable ecosystem, “said Mohamed BEN OUDA, Managing Director of Groupe Palmeraie Développement.

Elie Younes, Executive Vice President and Development Director, Radisson Hotel Group, said: “Radisson Abidjan Plateau is the second Radisson Hotel to be signed in West Africa since the opening of the Dakar Radisson Dakar Diamniadio in Senegal. in 2017. The hotel will strongly support the growth of the Radisson product, our high-end hotel brand that offers Scandinavian hospitality throughout the African region. It will also be the Plateau’s favorite hotel because it will house the largest hotel rooms and conference center in the city center as well as the only bar and restaurant on the city’s roof. ”

The new hotel unit, whose works were launched on Monday, June 25, 2018, has secured all administrative authorizations, including the approval of the Ministry of Tourism, the building permit of the Ministry of Construction, Housing, Sanitation and Urban Planning and the favorable opinion of the Ministry of Environment and Sustainable Development.

The complex will be positioned 4 * plus and will have 152 rooms with a mix of studios of 33 square meters and one and two bedroom apartments, and the largest business center accessible in the city center. Abidjan. Its dedicated area will be 1,000 square meters divided between four conference rooms and eight meeting rooms.

The Radisson Abidjan Plateau hotel will also offer several catering concepts, including the city’s first “sky bar” with swimming pool and an all-day dining restaurant for a unique culinary experience. A fully equipped fitness room will also be available. In addition, a large car park with 100 parking spaces will facilitate access to the property.

The Palmeraie Development Group, with 45 years of expertise in the real estate and tourism sectors in Morocco, plans to expand its development in the rest of the continent and mainly targets the urban business hotel sector in the main capitals African economic and political

The African portfolio of Radisson Hotel Group includes 85 hotels and more than 17,600 rooms in operation and under development.