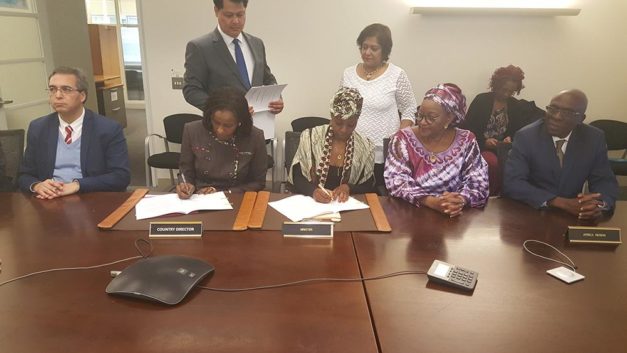 The signing of this Supplementary Financing Agreement for the Electricity Sector Rehabilitation Project took place on Tuesday, April 17, 2018 in Washington DC. Malado Kaba, Minister of the Economy and Finance has reviewed the efforts made since 2011.

“We have doubled energy production with the construction of our Kaleta dam and we will increase it to more than 700MW with the construction of Souapiti and the rehabilitation of other hydropower plants. These efforts have had a significant impact on growth despite the marginal share of the electricity subsector in our GDP in 2016. These efforts reflect the importance of this sector which is the cornerstone of the transformation and economic diversification sought in our PNDES “suggested the boss of the Guinean economy.

She believes that despite these efforts, only 25% of the population has access to electricity (at the interconnected grid level). In rural areas, the situation is even more difficult and it is here, according to her, that the majority of our populations live. The financial situation of the sector is also worrying as costs are not covered by selling prices and result in a significant financial burden on the national budget.

“While the sector analysis reveals ongoing and ongoing production efforts at the interconnected grid level, distribution issues and governance aspects of the sector remain critical issues if we are to sustain and, above all, sustain massive investments that we make today and that we will continue “, she notes.

The first tranche of funding has allowed, according to the minister, to contact the management of Electricity of Guinea (EDG) by VEOLIA; the installation of meters in the city of Conakry; the analysis of fuel supply costs for thermal power plants in Guinea and the improvement of efficiency and effectiveness in the fuel supply chain; technical assistance to develop the anti-fraud policy.

According to forecasts, these reforms will ultimately reduce production costs; increase billing and collection improve the quality of infrastructure and strengthen the capacity of human resources.

As part of this additional financing, the Guinean Government undertakes to surrender to Electricité de Guinée (EDG) an amount of $ 20 million which will be used to implement components 2 and 3 of the project which aim to improve the distribution network of Conakry and the commercial performances of the EDG and provide technical assistance for the implementation of the project.

Finally, it should be noted that Guinea’s hydropower potential is estimated at a capacity of more than 6,000 MW, a solar potential of 4.8 kWh / day with nearly 1165 watercourses for a rainfall of more than 400 billion m3. of water per year.

Guinea therefore considers with all its energy potential to become a key exporter of electricity in the sub-region.