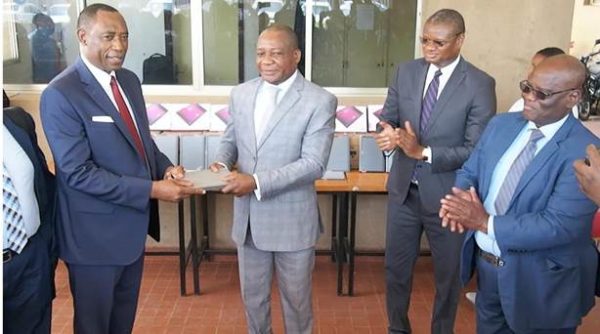 The Economic Commission for Africa (ECA) has handed over 15,000 electronic tablets and accessories to the government of Togo to be used for the collection of the country’s population and housing census. The handover ceremony, held on 27 September 2022 in Lomé Togo, marks the first time the ECA is formally providing IT equipment for census taking.

The equipment was handed over to INSEED, Togo’s principal government institution in charge of statistics and census data. In addition to the IT assets, ECA has developed a dashboard for INSEED that tracks progress and quality of enumeration, and shares and monitors progress with field teams and other stakeholders including a data repository for evaluation.

In his remarks, director of the African Centre of Statistics, Oliver Chinganya, explained the ECA is seeking to transform the census process from paper trails to digital systems. Mr. Chinganya commended Togo for the initiative it showed to request tablets stating “ECA is very proud and honored to have extended this gesture to the Togolese government. We strongly believe the use of these tablets will contribute to strengthening the production of high-quality and timely data for Togo.”

Togo’s Edjéou Essohanam, Chief of staff, Ministry of Development Planning and Cooperation, thanked the ECA, noting that the equipment will go a long way to ensure that his country generates data and statistics that are timely, reliable and meet internationally recognized standards. Mr. Essohanam said Togo has to deliver efficiently “so that other countries can draw inspiration from our experience”.

The traditional ways of conducting a census can often be lengthy, labor-intensive and carry the risk of lower data accuracy thereby reducing the prospects of successful censuses and deterring countries from conducting them. For this reason, the ECA has made a deliberate decision to source and procure census tablets and related infrastructure to support countries’ implement digital censuses.