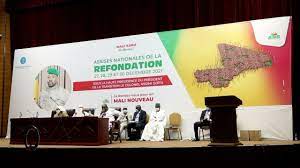 This is one of the recommendations resulting from the National Conference on Refoundation in Mali, launched on December 11, 2021 in various circles and municipalities across the country. The participants, indicates a note read on Thursday 30 at the end of the proceedings, voted in favor of the extension of the transition in order to be able to carry out structural institutional reforms and allow credible, fair and transparent elections.

“The deadlines put forward vary from six months to five years”, specifies point 7 of the 46-page document read in the presence of Colonel Assimi Goïta, the president of the transition. The latter, when speaking, declared that “the government will put in place a timetable aimed at ensuring a peaceful and secure constitutional return”, “in accordance with the recommendations of the National Assizes”.

“This is therefore the opportunity and the place to reassure the Malian people of our commitment and our determination regarding the implementation of the resolutions resulting from these Sovereign Assizes”, also indicated the transitional president. And to invite ECOWAS to “further support Mali in carrying out actions by supporting the forthcoming organization of elections”.

Meeting on December 12, the heads of state of the sub-region again called on the junta to organize elections next February – as initially planned – under penalty of worsening the sanctions that already weigh on the government. country. For their part, the military promised, a few days earlier, to provide a “detailed” timetable no later than January 31, 2022.

These consultations are seen as the final phase of consultations leading up to elections and the return of civilians to power. The country experienced a coup in August 2020 led by the current ruling junta, which also ousted Bah Ndaw, the former transitional president and his prime minister last May.

Roch Marc Kaboré on Mali: “the reforms could only be carried out by democratically elected authorities”

Mali: who is Ibrahima Ndiaye, the new Director General of the BDM