[Tribune] It is time for Africans to take ownership of the development of their continent . 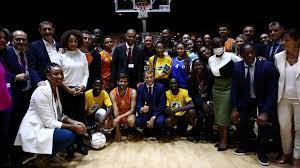 Part of the youth and the African diaspora spoke eloquently in Montpellier, to affirm their desire to change the model of cooperation that African countries maintain with France, and implicitly with the rest of the world. From these discussions emerged a firm desire on the part of Africans to take ownership of the development of their continent. This requires the need to adapt political and economic institutions to the needs of expressing private initiative.

Indeed, the African populations now want to welcome more direct investment, less debt, and even less development aid. The declared wish to leave a model of “assistantship” to migrate to a business partnership model that favors cooperation between entrepreneurs, rather than between governments, is based on a will of civil societies and the private sector to bypass the dynamics. traditional inter-state financing which only too rarely benefits small and medium-sized enterprises (SMEs) and micro-enterprises which represent more than 80% of jobs and 90% of the number of economic units in activity.

When we analyze the financing dynamics of the formal sector of African economies, we observe that a significant part of the wealth is mobilized and held by the public sector. During the COVID-19 crisis, for example, the public sector benefited from budgetary support from bilateral and multilateral partners, as evidenced by the allocation of special drawing rights that was made beyond traditional quotas and the suspension of debt service payments which made it possible to make available additional resources.
According to data from the International Monetary Fund (IMF), developing countries have allocated 2% of their gross domestic product (GDP) to deal with the economic and social consequences of the pandemic, compared to 15% on average in countries with more advances. It must be recognized that many advanced countries have privileges that the countries of the South do not have, such as the ability of their central banks to create money supply without generating uncontrolled inflation. Nevertheless, there is still the problem of the lack of flow of budgetary resources mobilized in high places, to the most vulnerable populations and businesses.

Regarding debt, it is important to clarify that in general, African countries are not over-indebted. With an average debt ratio of 60%, the debt, although increasing substantially over the last ten years (ratio to 40% in 2010), remains relatively low compared to the average in the rest of the world. world. Public debt, when used to finance productive investments that boost growth, remains a relevant means of financing economies. The concern, however, is that it has often been difficult for the populations to perceive in this increase, correlative achievements in terms of public investment and reduction of the difficulties of their daily lives.

With regard to development aid, numerous studies, including those by Dambisa Moyo, have demonstrated the limited impact over time of this form of financing. Development aid has a palliative character, while African economies need structural financing. It also suffers from a sub-optimal allocation because it responds more to the priorities of the donors, than to the development agenda of the beneficiaries. This does not, however, make it a source of financing to be eliminated because development aid is essentially directed towards social spending which has a tradition of being underfunded by public and private investment: health, education, and any other aspect related to human and humanitarian development.

It therefore emerges that civil society clearly identifies the strengths and weaknesses of each mode of financing African economies. However, if direct investment is the form of financing which represents the most advantages in terms of job creation, transfer of knowledge, diffusion of technologies, and possibilities to increase the capacities of production of goods and services. services ; However, it remains a form of financing that is difficult to mobilize for African economies, and costly at several levels in the absence of appropriate public policies.

According to UNCTAD, the rate of return on foreign direct investment (FDI) in Africa was 11.9% in 2010. In 2018, this rate deteriorated by almost half to 6.5%. By way of comparison, this rate is 6% for the advanced countries, for a perception and taking of the risk much less important.

When we know that Africa, over the period from 2010 to 2018, generated the second best rate of return on FDI at 9% (behind South-East Asia) and that, despite this, the share of FDI to the continent remained below 3% of total flows; there is reason to wonder about this paradox and to worry about these possible consequences in a context of declining globalization, erosion of FDI yields, and weakening of the productive base due to the effects of the pandemic.

Moreover, this problem is exacerbated when we take into account the issues related to debt. In 2018, an analysis of bonds issued by 11 African states estimated the cost of interest in US dollars at 5.8% on average. In other words, given the small return gap that now exists between the financing of African economies by debt on the one hand, and by direct investment on the other, it is easy to understand that the partners of Africa preferred to lend rather than invest on the continent.

Beyond the cost of return on foreign direct investment, which reflects a cost of remuneration for savings and foreign expertise, there are other, less noticeable costs to consider.

Foreign direct investment can have a crowding out effect on local investment when local public policies fail to involve domestic entrepreneurs in the round table. FDI is also a form of appropriation of local savings because African banks are more inclined to finance these projects than to finance those carried out by local entrepreneurs. There is also the concern for ownership of the production apparatus, which is also owned by foreign interests, while the issue of national sovereignty increasingly arises.

Due to the lack of basic infrastructure, African countries have set up investment codes and special economic zones that offer tax exemptions and guarantees of repatriation of capital to address the lack of competitiveness of their economies. . The consequence of this was to organize the repatriation of flows abroad in the absence of local reinvestment opportunities, to contribute to the drying up of tax revenues, and to create enclaves that favor export sectors, whereas the continent above all needs to organize import substitution production.

To really benefit from FDI, it is crucial to include local entrepreneurs in the round table of investment projects so that they appropriate part of the know-how and capital that is generated in order to redeploy them in sectors less attractive for FDI, but crucial for the development of the local economy. This will allow nationals to nurture, diversify and appropriate an increasingly important part of the national and continental production base.

Institutional, economic and political reforms will necessarily have to be based on these fundamentals to meet the growing aspirations of Africans on the continent and in the diaspora.