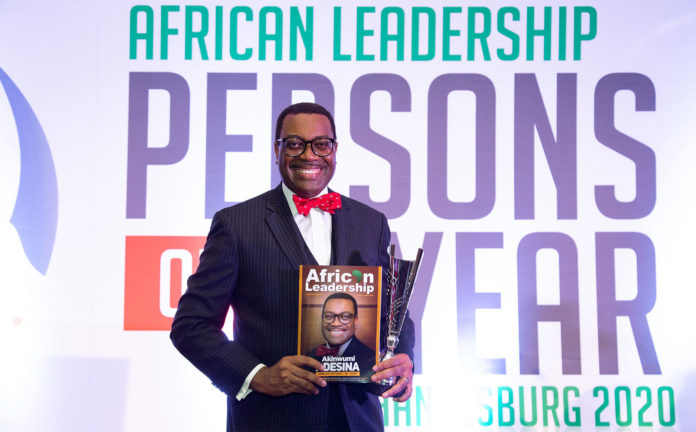 Over 200 leading African political, business, and diplomatic leaders gathered in Johannesburg for the 8th African Leadership Magazine Persons of the Year Award dinner. They witnessed Dr. Akinwumi Adesina, President of the African Development Bank, being honored as the African of the Year 2019.

The highlight of the event was the keynote speech delivered by Dr. Adesina. His passion for the continent was palpable, connecting with the attentive audience throughout his speech. Dr. Adesina expressed his humility in being “recognised for my very modest achievements and contributions to Africa. Humbled to be nominated by what I gather to be the 60% of the votes cast by some 1 million people, humbled to be at the helm of an organisation that is making a tremendous difference across Africa – the African Development Bank. An organisation that is daily making prosperity a reality.”

He dedicated the award to his wife, Grace, the Board, staff, and colleagues at the bank, his mother, and “to the young mothers, struggling to bring up a child, to the farmer in search of a better tomorrow, to the youth of Africa longing for a better future, and to Africa’s journalists who risk their lives in helping to tell Africa’s true story.”

He added: “these are the values that President Oliver Tambo and President Nelson Mandela taught us. Our commitment to the cause of a prosperous and better Africa is unwavering. It is in that spirit that as a country, we have placed our resources both human and financial, to the resolutions of conflicts.”

The African Leadership Magazine Persons of the Year Awards is now the most popular vote-based third-party endorsement in Africa.

Dr. Adesina was elected the 8th President of the African Development Bank in 2015. He has been a leader in the African agricultural innovation space for over 30 years. He has contributed to Africa’s economic growth by helping to strengthen the continent’s food security and promoting a workable agribusiness model.

In his remarks, Adesina urged Africans to rise, be bold and determined.

“Africa does not need anyone to believe in her or to affirm her place and position in history. Africa will and must develop with pride. For right on

the inside of us, as Africans, lies our greatest instrument of successes:

Dr Adesina is in good company joining some notable previous winners of the African of the Year Award:

Akinwumi Adesina: “Africa must not be harmed in climate finance”