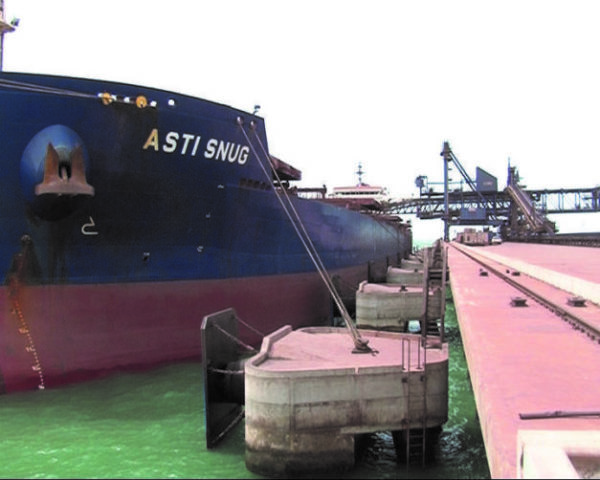 The European Investment Bank (EIB), which is the bank of the European Union, and the African Development Bank (AfDB) have concluded financing of $ 59 million and $ 50 million, respectively, over twelve years, with the National Industrial and Mining Company (SNIM), the leading mining operator in Mauritania.

This funding is intended for SNIM’s mineral dredging project to strengthen the capacity of its port facilities in Nouadhibou, the economic capital of Mauritania, located north-west of the Atlantic coast of Mauritania.

This is a major funding for a project with a strong social and economic impact, with the creation of 94 full-time jobs during the construction phase and 230 indirect jobs. The SNIM Foundation will also benefit from this funding for its social activities in Mauritania.

The ore port of Nouadhibou, whose draft does not currently accommodate vessels of more than 150,000 tonnes, is the marine terminal from which SNIM exports its iron ore production, and it is de facto a key place in the Mauritanian economy. Vessels docking at the current terminal account for only 6% of the world’s bulk carrier fleet, whose limited availability significantly increases costs.

The project supported by the EIB and AfDB includes the deepening and widening of the access channel of the SNIM mineral terminal over 25 kilometers with a draft to accommodate vessels of 230,000 tonnes. Ultimately, the completion of this work will enable SNIM to increase the efficiency of its transport chain, improve its profitability, competitiveness and resilience on the international market in the face of fluctuations in world iron ore prices.

“This is a large-scale and strategic financing for the development of the ore port of Nouadhibou. This project to expand the port facilities will have a strong social and economic impact for Mauritanians, with the creation of many jobs, “said Ambroise Fayolle, Vice President of the EIB, adding:” Support for the development of adapted infrastructure efficient and competitive, is at the heart of our action in Africa, and fully in line with the objectives of the Cotonou Agreement and the United Nations Development Goals “.

This project, fully in line with two of the African Development Bank’s priorities, industrializing Africa and improving the quality of life of Africans, received support from the first African funding institution. This support from the African Bank will make it possible to close with the EIB the financing plan, but also to strengthen the financial resources of the SNIM Foundation for social projects: access to water, energy and health infrastructures .

Abdu Mukhtar, Director of the Department of Industry and Mines of the African Development Bank, said: “Mauritania has great potential to become a major player in the world’s mineral production. The works of the channel will enable SNIM to accommodate larger vessels and thus increase its exports to the European and Asian markets. The African Development Bank supports the industrialization of Africa. The loan in favor of SNIM is part of the efforts of our bank to promote good management of sustainable natural resources, the growth of this African industrial champion that is the SNIM and the development of its infrastructure. ”

“The ore port dredging project is an important project for SNIM. It will make better use of the port’s facilities by loading boats of 230,000 tons, “said Mohamed Salem OULD BECHIR, Director General of SNIM. “This project, which is part of SNIM’s strategy of gradually increasing production capacity, also aims to improve the competitiveness of our products by reducing our production costs and increasing the productivity of our products. our facilities. Its impact on costs will therefore be significant, especially since a large part of the additional volumes should be destined for markets where the cost of freight is high, “he concluded.

Created in 1957 by the Treaty of Rome, the EIB is the bank of the European Union. It brings its financing and know-how to solid and sustainable investment projects in more than 160 countries. The EIB has been active in Africa for more than 40 years. In sub-Saharan Africa, it operates under the Cotonou Agreement and supports projects related to regional development and infrastructure that contribute to economic growth. In 2017, the Bank lent more than € 1.47 billion to finance 40 projects in sub-Saharan Africa, the Caribbean and the Pacific as well as overseas countries and territories. More information on EIB activities in Sub-Saharan Africa, the Caribbean and the Pacific.

About the African Development Bank Group

About the National Industrial and Mining Corporation

Heiress in 1974 of the Miferma (Company of the iron mines of Mauritania), the SNIM exploits the deposits of iron ore in the north of Mauritania. SNIM also operates more than 700 kilometers of railroad to transport iron ore from Zouerate to Nouadhibou, where it has a deep-water port. SNIM, the second largest African producer of iron ore, is a major player in the Mauritanian economy. It directly employs more than 6,300 people. In 2017, its sales accounted for 30% of Mauritanian exports, and the value of its activities 7% of the national GDP.