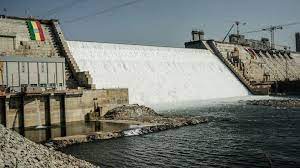 Egypt and Sudan each condemned, on Monday, February 21, the start of electricity production from the Grand Renaissance Dam (GERD) by the Ethiopian authorities. A project which, since its launch in 2011, has been a dispute between Ethiopia and its neighbors located downstream of the Nile.

In a statement, the Egyptian Foreign Ministry set the tone, saying it was a “unilateral operation of the dam in deliberate violation of the declaration of principles signed in 2015 by the Ethiopian Prime Minister”. Adding that this inauguration is a “threat to regional stability”.

For its part, Khartoum condemned a “unilateral measure” by Addis Ababa. “Ethiopia’s decision to unilaterally commence operation of the GERD constitutes a violation of the Declaration of Principles signed by the three parties,” read a statement from Sudan’s acting Minister of Irrigation and Water Resources. , Daw Al-Bait Abdul-Rahman.

Prior to this decision, the diplomat noted, Ethiopia should have provided the other parties with enough information, such as the volume of water expected to come out of the dam, to know whether the Sudanese reservoirs would be able to absorb it to adopt the necessary precautions. And to clarify that Ethiopia has never informed his country of the start of electricity production.

Tributaries of the Nile

Indeed, the two neighbors of Ethiopia, all dependent on the Nile for their water resources, fear a lack of water and the loss of arable land as part of the commissioning of this project. And had asked Addis Ababa to pause the filling of the dam. But the negotiations initiated under the aegis of the African Union in order to reach an agreement on the filling of the dam and on the methods of water retention operations between the three parties have never been successful.

“There have been many false rumors that the Ethiopian government wants to harm Egypt and Sudan by using the dam to drain their land. This was never our plan and today is proof of that. We want to congratulate all our brothers, not just Sudanese and Egyptians, but all Africans,” Ethiopian Prime Minister Abiy Ahmed said on Sunday February 20 at the launch of the dam’s production.