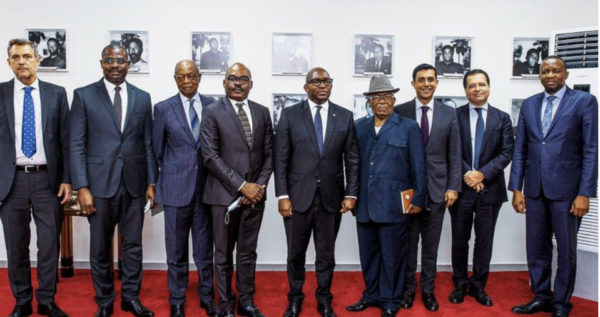 Business suits and black leather shoes aside, are there any similarities among the top 1% of the Congolese banking sector? This article proposes an assembly of the pieces of this puzzle in the form of a fictional interview.

By Obed KAMBALA, economic analyst, holder of a Master’s degree in Economics and a Certificate of Expert in Risk Management.

… All the same, we would not entrust the management of a credit institution to the first comer, would we?
That’s right ! The management committees of banks include big names whose know-how is based on in-depth higher education and many years of experience. At the head of each committee is appointed a general manager, who is vested with the most extensive powers for the exercise of his functions within the limits of the bank’s corporate purpose. Beyond being a privilege, it is first of all a question of heavy responsibilities in a political and economic context that is not always favorable. DGs have almost no room for error, since each one can be fatal. Research has even revealed that between 35% and 50% of CEOs are replaced within 5 years (Charles M. Farkas and Suzy Wetlaufer, 1996). Despite this, several men and women, black and white, African, Asian, European and American have fought tooth and nail to meet this challenge from the time of the Belgian Congo to the present day.

In front of personalities with such diverse origins and profiles, are there common and distinctive characteristics that justify their place in such a restricted circle in the DRC?
To provide some answers to this question, we conducted an investigation on a sample of 50 general managers in the DRC chosen at random from around twenty banks between the years 2001 and 2022. The results of this study are grouped in 3 categories: the profile, the studies pursued and the professional experience of the managing director in the Congolese banking sector.

Profile
As you may have noticed, there is strong gender discrimination in CEO appointments. Indeed, only 6 members of our sample are of the female gender, or 12%. They are Rebecca Gaskin (Stanbic Bank), Félicité Singa-Boyenge (FiBank), Viviane Bakayoko (Citi Bank), Hannah Siedek (Procredit Bank), Marlene Ngoyi (BGFI Bank) and Annie Ekeme Nnkakey (UBA). They are mostly African and all hold a bac+5 (Master of Science or MBA) at least. Among these distinguished ladies are two Congolese: Madame Ngoyi and Madame Singa. To date, only one bank among the fifteen operational ones is dominated by women; the Cameroonian Madame Ekeme, who recently replaced Mr Kabisi at the head of the Congolese DR subsidiary of UBA.

It must be said that this “gender gap” is not specific to the DRC or even to Africa. According to IMF (2018), women represented less than 2% of CEOs of financial institutions worldwide and less than 20% of board members in 2013. This situation has not really changed since. Congolese nationality represents 22% of the sample, followed by French (16%) and Cameroonians (12%). Two-thirds of the managing directors are African and a quarter are of European origin. The majority (78%) come from a country whose official language is French, such as the country of Lumumba. Among the nationals of Africa, a good part belongs to a member country of the Economic Community of Central African States (ECCAS) such as the DRC.

Their age at the time of appointment to this high office is between their late thirties and their fifties, but the majority were in their forties. Mr Mukeba is among the youngest to have taken on the position of Managing Director with around 37 years old in 2014 at Procredit Bank. Appointed managing director at around 41, Mr Rawji also falls into this category. The two bankers were included in the 2017 Choiseul 100 Africa ranking, a study that identifies and ranks young African leaders aged 40 and under, who are expected to play a major role in the continent’s economic development in the near future.

Continuing studies
Most DGs have a post-graduate degree. It is generally a question of a professional or research Master’s degree: Master’s Degree, MBA, DESS, DEA, Maitrise, etc. In addition, several held two or even three before their designation. Among them are Eric Mboma (Standard Bank), Annie Ekeme (UBA), Félicité Singa-Boyenge (FiBank), Jean Baptiste Siate (Ecobank), Willy Mulamba (Citi Group), Yvonnick Peyraud (Advans Bank), etc. The combination MBA and Master in Economics is the most common.

A large number of DGs have opted for business administration/management (+15), finance (+10) and economics (+9), which are fields that directly affect the very life of the establishment. credit and the environment in which it operates.

professional experience
The average number of years of professional experience of a DG who takes office in the DRC exceeds the bar of fifteen years. We still encounter atypical values ​​such as 7 and 32 years, among others. As Charles M. Farkas and Suzy Wetlaufer (1996, June) so aptly pointed out: “there is no school for the general manager – except the school of experience”.

At least 36% of CEOs already held the same position in another subsidiary of the same group (such as Mr Babatunde, who was CEO/FBN Guinea) or in another bank (such as Mr Losembe, who was first CEO/Citi before to join BIAC) or in a non-banking institution (such as Mr. Wazne, who was CEO/EcoworldConstruction Company). About 12% were deputy general managers before becoming CEO and 18% at the head of the Commercial banking, Corporate banking or Retail banking divisions. Few of them had professional experience in the Congo and many were discovering the country of Lumumba for the first time as part of their appointment to this high-calibre position.

Several have worked at least in a different bank from the one where they were appointed general manager. With a few exceptions, the internal recruitment method is preferred when it comes to the CEO. This is beneficial for the bank in several respects. Indeed, “The employee promoted to new functions is already integrated into the company, that is to say that he knows the workings of its operation, its means, its development policy, the corporate culture, etc ” maintains Grégory Coste (2021).

The term of office of several DGs on Congolese soil is in the range of 2 to 3 years, with an average of 4 years. What corresponds to a mandate

classic two to four years renewable once. That said, four personalities deviate significantly from this norm. They are: Yves Cuypers (2004-2021) with approximately 17 years at BCDC; Thierry Taeymans (2002-2020), who led Rawbank for almost 18 years; Oliver Meisenberg (2009 to date) and Henry Wazne (2012 to date), who coordinate the activities of TMB and SofiBanque respectively.

Apart from the long years of management, these bankers are also from Europe with more than ten years of experience before their appointment at the head of a bank in the DRC. They have the merit of having led and/or maintained the so-called local banks – at least most of them – at the top of the Congolese banking industry. Regarding total assets, receivables and customer deposits, this category of banks has maintained its place in the top 3 in the DRC for a long time.

In summary
Based on the above, it is safe to believe that a managing director of a credit institution in the DRC is likely to be an African male in his forties with a postgraduate degree in business administration, finance or in economics from a European university. It is also judicious to affirm that it can most likely be a non-resident professional (at the start), designated by an internal recruitment method, who brings to the table more than 15 years of experience, including those in the Commercial, Retail or Corporate banking segments and even the management of another bank.

While the number of national DGs fell by 50% as a result of this change, that of Deputy DGs increased. We can count in this circle Marie-Gabrielle Kalenga (Standard Bank), Jean-Claude Tshipama (EquityBCDC), Timo Ntoto (Ecobank), Yannick Mbiya (TMB), etc.