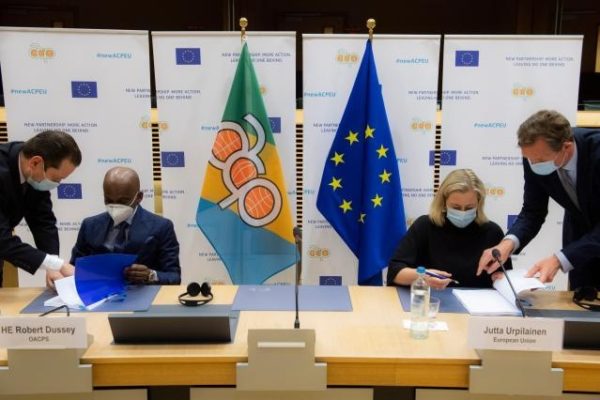 The European Union (EU) and the Organization of African, Caribbean and Pacific States (OEACP, formerly the ACP Group of States) concluded this Friday, April 15, a new partnership agreement which marks the official conclusion of negotiations. the post-Cotonou agreement, which sets the framework for political, economic and sectoral cooperation for the next twenty years.

This is the culmination of a process that will have lasted nearly 3 years between the two parties. An “arduous” negotiation process, notes the Togolese minister, representing the OEACP countries, in an official statement. “But I am delighted with the end result”, he added, adding that the “new agreement takes into account the concerns and expectations of the States of the EACP and constitutes a solid basis for a future strengthening of the already close ties. set up with the EU ”.

For her part, the Commissioner for International Partnerships and Chief Negotiator of the EU, Jutta Urpilainen, stressed that “the agreement should be a game-changer when it comes to strengthening the bilateral relations that the EU has with each of the states. OEACP and their respective regions, building the OEACP-EU partnership into an international force to advance the common ambitions of the parties on the world stage ”.

After the negotiations are concluded, the signing, provisional application and conclusion of the agreement will be subject to the approval of the Council of the European Union, based on proposals from the European Commission, the statement said. These proposals, along with the negotiated text translated into all EU languages, will be forwarded to the Council in the coming weeks. “The Council will only decide on the conclusion of the agreement after receiving the consent of the European Parliament, as set out in Article 218 (6) of the Treaty on the Functioning of the European Union (TFEU). The agreement is expected to be signed in the second half of 2021. For it to enter into force, the parties will need to have completed their respective internal procedures, “it said.

Note that the Cotonou Agreement, signed in 2000 in Cotonou (Benin), was initially due to expire in February 2020. But its application had been extended until November 30, 2021.