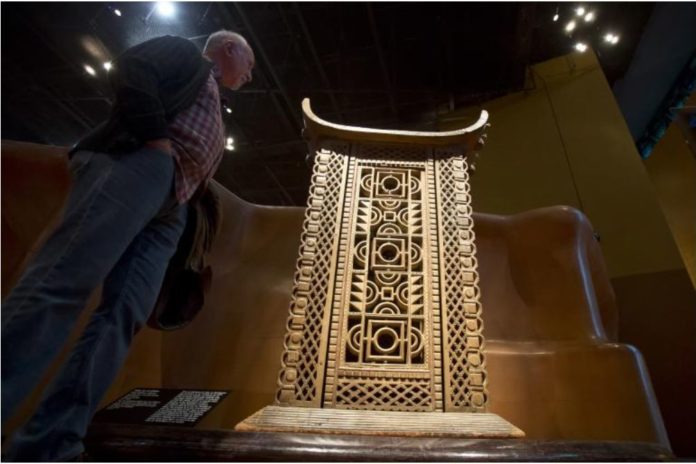 The imminent restitution of works of art to Africa, voted in the French National Assembly, is a reminder that the looting of cultural property is not over. The illicit art market is even used to launder money and finance terrorism.

On Tuesday October 6, the French National Assembly unanimously approved a bill restoring to Benin and Senegal cultural property brought to France during colonial times as “spoils of war”.

Twenty-six pieces from the Béhanzin treasury, looted from the Abomey palace in 1892, will leave the quai Branly museum for Benin, while Senegal will have to recover a saber and its scabbard attributed to El Hadj Omar Tall, a military and religious figure. 19th century West African.

For the rapporteur of the text, the deputy (LRM) Yannick Kerlogot, this bill shows that “we are capable today of recognizing an inglorious aspect of colonialism. And by restitution, by this desire to give back, to give, we look to the future in the direction of African youth ”.

The return of works of art looted during colonization has indeed been demanded for some time. In 2013, the Representative Council of Black Associations in France (CRAN) launched a campaign advocating “reparation” for crimes committed during French colonization, including the looting of works of art. Supported by Jean Gervais Tchiffi Zié, Secretary General of the Forum of Kings and Traditional Leaders of Africa, this campaign was presented to Unesco and the UN Human Rights Council.

Looting and the illicit market continue

In his speech in Ouagadougou, delivered on November 28, 2017, the French president was in favor of this type of initiative. “African heritage cannot be found only in private collections and European museums. It must be showcased in Paris, but also in Dakar, Lagos, Cotonou … Within five years, I want the conditions to be in place for a return of African heritage to Africa, “Mr. Macron said at the time.

If the former Minister of Culture and now in charge of Foreign Trade, Franck Riester, insisted on the punctual nature of these restitutions, it is certain that the fate reserved for works of art goes well beyond the framework of this law Project.

The dismantling, last June, of a vast illegal network of trafficking in antiques from the Near and Middle East reminded us: decolonization has not put an end to looting and art trafficking has even become a lucrative business that attracts more and more investors and businessmen. Even more worrying, the illegal sale of works of art constitutes one of the main sources of income that irrigates the economy of terrorism, according to a report released by the Policy Council for the fight against money laundering and the financing of terrorism (COLB).

Organized around international networks of “thieves”, but also officials and professionals of the art market, the illicit art market also has an essential asset for its operation. Before being resold in France or in Europe, the majority of these works pass through free ports, whose opacity favors the traffic of looted works. These are areas not subject to customs services where luxury goods (art, jewelry, watches, wines, etc.) are stored until final importation into the countries of destination.

An opacity which “could be used for the financing of terrorism”

However, the COLB considers that “the presence of free ports at the international level allows criminals to store long-term goods of great value by offering them anonymity, security and opacification of the traceability of the good”. MEPs from Tax3, the Special Commission on Financial Crime, Tax Evasion and Tax Evasion, believe that free ports are places “at risk for the reputation and security of the European Union”.

Tax3 took a particular interest in Freeport Luxembourg and its founder, Yves Bouvier, nicknamed the “King of free ports”. This Swiss businessman and art dealer is a shareholder in the free ports of Geneva, which the former French Minister of the Economy, Michel Sapin, had denounced for the opacity, which “could be used for the financing of terrorism”.

Also founder of the free ports of Singapore and Luxembourg, Yves Bouvier is also well known to Swiss justice. Catherine Hutin-Blay, Picasso’s daughter-in-law, accuses Yves Bouvier and his partner Olivier Thomas of having stolen two paintings and 58 drawings by the Spanish master from her, which they have denied from the start.

As Unesco points out, the increase in demand for works of art and antiques, considered in times of crisis as a safe haven for many collectors and investors, encourages illicit trafficking and therefore theft. and looting. In the absence of stricter controls, this parallel market also allows money laundering and the financing of terrorism.