DRC: start of construction work on the deep-water port of Banana 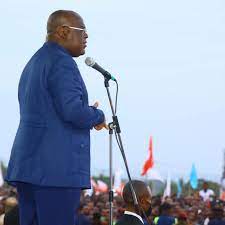 In the Democratic Republic of Congo, President Félix Tshisekedi kicked off construction work on the deep-water port of Banana in Kongo Central (north-west of the country), this Monday, January 31, 2022 in Moanda.

According to the authorities, the platform will increase the volume of international trade and thus enable the country to respond to the meeting of African integration with well-renewed and well-assumed assets. It will also allow the DRC to develop an industrial and logistics zone as well as the consequent creation of jobs.

In a speech delivered on December 13, 2021 before the parliament in Kinshasa, Félix Tshisekedi announced this launch for 2022. Two days earlier, his government and the Emirati company DP World signed a collaboration agreement for the construction of the port whose works are estimated at 1.3 billion USD, and which will have to end in 2025.

According to the Congolese head of state, this project should develop his country’s capacities in terms of trade and logistics while supporting the country’s growth and playing a key role in regional integration. This port will have to offer the country an opening on the sea with the capacity to receive ships of greater capacity.