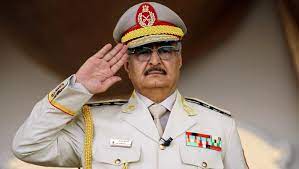 “After two hours on the ground, the plane took off for Cyprus”, indicates for its part, a report from the Israeli airport authorities which did not give the identity of the occupants. Probably relatives of the Libyan marshal.

Indeed, prior to the signing of a peace accord in October 2020, Khalifa Haftar’s forces controlled much of eastern and southern Libya and were fighting the internationally recognized government based in Tripoli. It has received support from several countries including Russia, Egypt, Saudi Arabia and the United Arab Emirates which signed a normalization agreement with Israel in 2020.

Marshal Haftar still challenges the authority of current Libyan Prime Minister Abdel Hamid Dbeibah and was due to stand in the postponed presidential elections.

Earlier this week, Dbeibah denied Saudi and Libyan media reports that he had met with Mossad officials in Jordan to discuss normalizing relations between Libya and Israel.

In November 2021, the Israeli newspaper Haaretz reported that Khalifa Haftar’s son, Saddam, had secretly traveled to Israel to gain support in the elections. Haftar’s son and former President Muammar Gaddafi’s son, Saif al-Islam, both coincidentally had the same unnamed Israeli PR firm working on their presidential campaigns, according to Israeli media.

The fact remains that with regard to future electoral contests, Israel is of interest to the various Libyan actors. For some time now, there have been several rotations of flights chartered by the men of Saif and Aftar in Israel.