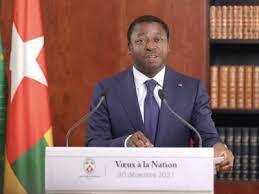 Togolese President Faure Gnassingbé announced, in a speech delivered on the night of Thursday 30 to Friday 31 December, a loan of one month’s salary to civil servants, in response to inflation observed for several months.

The measure was the least expected: “after reflection, I instructed the government to grant civil servants in the public and parapublic sectors and retirees, from next week, an advance of one month’s salary, which will be repayable in installments. monthly until December 2022. I encourage the private sector to take similar action, ”he said.

“For retirements from 2020, the expected payment of allowances equivalent to three months’ wages will be made from this month of January,” continued Faure Gnassingbé who also announced that “vigorous control actions prices ”will be reinforced and will multiply throughout the territory.

These measures, he recalled, follow a series of others aimed at limiting the effects of “the generalized increase in prices”, which, he said, has “been felt for several months in the basket. of the housewife, in practically all the countries of the world ”. These include, among other things, free school fees in secondary education and the payment of a month’s electricity bill for the social brackets decided on last summer.

“In addition, we have maintained the price subsidy, including fertilizer, farm equipment and wheat. The government continued to reduce drinking water connection costs for the most vulnerable households, ”Faure Gnassingbé also recalled.

As a reminder, the country is experiencing a rise in prices never observed for more than 10 years.