The 5 best African ministers of economy and finance 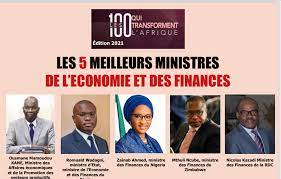 Here are the top 5 African Ministers of Economy and Finance. They are all new compared to the ranking of previous years with the exception of Beninese Romuald Wadagni, who was on the short list for the fourth consecutive year. In this exercise of appointing the best ministers, central part of the list of “💯 who are transforming Africa” and of the 18 winners of the Financial Afrik Awards trophies, some 25,000 duly listed voters (a first) cast their vote on a selection. initial made from the crossing of opinions of technical-financial partners (ADB, World Bank, IMF), rating agencies and country risk assessment organizations etc.).

The Financial Afrik Awards jury (5 members) then added a qualitative perspective based on leadership (it is the leader who creates the dynamic and not the other way around), the academic career, the appreciation of the reforms underway ( business environment), promotion of the country, the ability to mobilize financing for the economy, growth and macroeconomic balances (control of debt, deficits and inflation).

On these last points (macroeconomic balances), we have repeated the same methodology as that of last year.

At the end of this triple filter of the selection committee, the public and the jury, it is the Mauritanian Kane Ousmane Mamoudou, Mauritanian Minister of Economic Affairs and Promotion of the Productive Sectors, who has been appointed best African Minister of the Economy and finances. Here is the ranking of the top 5 in order.

Ousmane Mamoudou KANE, Minister of Economic Affairs and Promotion of Productive Sectors
A graduate of the Polytechnic School of Paris, Ousmane Mamoudou KANE, has held several prestigious positions at the international and national level. Former vice-president of the African Development Bank (ADB), Governor of the Central Bank of Mauritania (BCM) then Minister of Finance, the economist is now in charge of the Ministry of Economic Affairs and the promotion of productive sectors .

To his credit, major reforms in terms of PPP and, in particular of so-called agricultural PPPs, the creation of a single window for investment and the promotion of the private sector as an engine of growth. The development of SMEs and the use of Public Private Partnerships are at the heart of Mauritania’s new approach to economic development.

Romuald Wadagni, Minister of State, Minister of Economy and Finance of Benin
In office since April 2016, Romuald Wadagni has accumulated successes and innovations. Under the ministry of this Harvard Business School graduate, Chartered Accountant in France and Certified Public Accountant in the United States, Benin has adopted a policy of proactive debt management, with successful exits on the international financial market and, above all, , reforms aimed at optimizing expenditure and revenue. Benin expects growth of 7% in 2022, one of the highest rates in Africa. In 2021, Cotonou issued a bond instrument in euros with the longest maturity ever reached by an African sovereign issuer. This issue made it possible to buy back debt on the regional financial market and generate savings of CFAF 36 billion intended for investment in sectors with high social impact.

Zainab Ahmed, Minister of Finance of Nigeria
In office since 2016 as Minister of Finance, Budget and Planning of Nigeria, Zainab Ahmed holds a bachelor’s degree in accounting from Ahmadu Bello University in Zaria and an MBA. Under his leadership, the country managed to cope with the crisis of low oil prices doubled to that induced by Covid-19, with a debt / GDP ratio remained at 33%. In 2022, Zainab Ahmed should face the biggest reform of his ministry: ending subsidies on petroleum products. Meanwhile, the country facing 13% inflation is forecasting 4.2% growth in 2021.

Mthuli Ncube, Minister of Finance of Zimbabwe
Former chief economist of the African Development Bank, Mthuli Ncube has won the battle against inflation and the continued depreciation of the Zimbabwean currency. His next goal is to bring his country up to middle-income economy by 2030. In 2022, Hararé targets a deficit of 1.5% of GDP. Inflation is expected to remain at 94.6% in 2021 and then 32.6% in 2022.