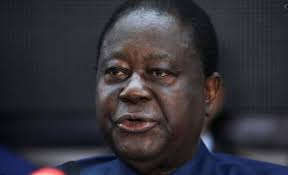 The Democratic Party of Côte d’Ivoire (PDCI) reacted to the statement by the public prosecutor, Adou Richard. Who announced, last Monday, the possibility of launching legal proceedings against the former Ivorian head of state Aimé Henri Konan Bédié (photo), in his capacity as leader of the opposition.

On Wednesday, December 29, the spokesperson for the PDCI, Soumaila Bredoumy, affirmed that the party will respond “without fear or fear” to legal proceedings in connection with the abuses of the presidential election of 2020.

Taking into account article 54 of law number 2005-201 of June 16, 2005 on the status of former President of the Republic, this opposition party declares: “the third term and its supporters are the direct and indirect authors of civil disobedience, the atrocities and violence that followed in October 2020 ”.

For him, the current lull in Côte d’Ivoire is the result of the commitment of the president of the PDCI, “supported by the will for peace and democracy to which the leaders of the opposition are firmly attached.”

At the press conference last Monday, the public prosecutor announced the arrest of 233 people for violence in several localities of the country and the search for 40 others. Violence perpetrated during the 2020 presidential election, the day after which the opposition announced the establishment of a National Transitional Council (CNT), chaired by a certain Aimé Henri Konan Bédié.