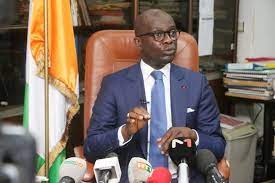 Facing the press on Monday, December 27, the Attorney General of the Republic of Côte d’Ivoire, Adou Richard, threatened to prosecute those who caused acts of violence during the 2020 presidential election.

“All those who contributed to the civil disobedience of the presidential elections of 2020 will be prosecuted … They will be subjected to all the rigors of the criminal law, the objective being to fight against the impunity of the perpetrators of serious offenses committed especially during each electoral period” , did he declare.

As for the charges, the public prosecutor indicates that the judges who will be appointed for this case will situate the degree of responsibility of the various people arrested, including the financiers of these acts of violence.

According to the magistrate, 233 people were arrested for violence in several localities of the country and 40 others are actively sought. “The vast majority of these people have been released on bail or been placed under judicial supervision. It should be noted that only 11 people are still in preventive detention, ”he adds.

The main opposition parties had called for civil disobedience before, during and after the presidential election, by all means preventing people from fulfilling their voting duties. A sling which led to the creation of the National Transitional Council (Cnt). “Electoral violence officially left 85 dead and nearly 500 injured in the country, between August and November 2020,” notes Adou Richard.