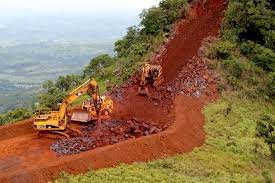 This announcement was made on November 23, 2021 following a strategic summit meeting between the shareholders of the SMB / Simandou project and the Guinean Prime Minister, Mohamed Béavogui. The objective was to present the progress of the project and try to reassure the new authorities on the continuation and respect of the schedule of the project of exploitation of blocks 1 & 2 of the iron deposit of Simandou.

The ruling junta having announced major reforms in Mines with local content, transparency and the withdrawal of dormant permits as a common thread, Sun Xhiushun and Fadi Wazni tried to reassure the Prime Minister of the Guinean transition, Mohamed Béavogui, in announcing that the mobilization of financial resources and the finalization of feasibility studies are underway to accelerate the construction of the Simandou iron ore disposal infrastructure.

Sun Xhiushun, the Chinese majority shareholder of the consortium and also general coordinator of the Simandou 1 and 2 project, also promised the Prime Minister that the construction of the railway for transporting the ore will be completed by the end of 2024. Long de 670 km, this railway called the “Trans-Guinean” that the SMB promised to build and which contributed to its selection by the former regime, to exploit blocks 1 & 2 of the Simandou iron deposit, to the detriment of the Australian Fortescue Group, will cross the whole country, leading to a deep-water port to be built at Morebayah in Forécariah.

For his part, Mohamed Béavogui recalled that the exploitation of Guinea’s mineral resources must be reflected in terms of impact. “We are at a time when Guinea must take advantage of the wealth created in the mines … that mining is combined with industrial and agricultural development.” Inviting at the same time, the SMB to play a “true strategic partnership”.