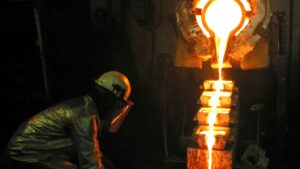 Officials from the Turkish company NZP, which specializes in refining gold and other metals, have expressed a desire to set up a refinery plant in the Democratic Republic of the Congo, saying “start first in Kinshasa”.

“We have come to respond to the call of the President of the Republic, Félix Tshisekedi Tshilombo, to create a refinery company that can allow the refining of Congolese minerals”, unveiled to the press the delegate of the Turkish company, Murat Niziplioglu, in leave a working session with the Minister of Industry, Julien Paluku Kahongya, on November 8, 2021 in Kinshasa.

A country with high mining potential, the DRC exported 15 tonnes of raw gold for a total value of USD 619 million in the first half of 2021, according to the Ministry of Mines. Almost all of these exports come from industrial mining (99%), and the Kibali Gold company produced more than 99% of the exported gold.

In a report published last October, the US rating agency Moody’s said it expected the DRC’s extractive sector to continue to play a central role in the economy as the main source of growth in the country. ‘to come up. This, after growth driven in 2020 by the dynamism of activity dominated by copper production, for which the country is the leading African producer and the 4th in the world.