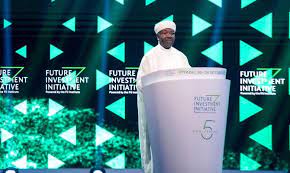 For the Saudi authorities, Gabon’s presence at this Forum was “quite natural”. “Gabon is one of the most advanced countries in the world in the fight against global warming. In addition, President Ali Bongo Ondimba is a close friend of the King “, we recall in the entourage of the Crown Prince.

This is quite a symbol, because it was in this holy city of Riyadh that President Ali Bongo had a serious stroke that had kept him away from major international meetings. Engaged in environmental issues, Gabonese President Ali Bongo has chosen the capital of the Kingdom of Saudi Arabia to fully mark his return to the international scene at the Middle East Green Initiative Summit.

Launched by the Crown Prince of Saudi Arabia, Mohamed Ben Salman (MBS), the Middle East Green Initiative (MGI) aims to define a roadmap that contributes to the efforts of the international community to protect the planet and nature. In his opening remarks, MBS praised the “highly noticed” presence of the Gabonese President, “his brother Ali Bongo”, whose commitment and leadership he also underlined in the fight for the preservation of the environment. Because, it should be noted, at the level of the African continent, Gabon is the negotiating country of the climate with the other partners.

Mohammed Ben Salman and President Ali Bongo, in turn, reminded world leaders that the purpose of this Summit, which is being held one week before the Glasgow Cop26, is to coordinate efforts to protect the environment and in the face of climate change with a view to establishing a roadmap to reduce carbon emissions in the region by more than 10% of global contributions, and plant 50 billion trees in the region, according to a program considered to be the most ambitious in the world in this area, and which alone represents 5% of the global reforestation target.

“We hope today, within the framework of this Summit, to work together to develop a regional roadmap and a working methodology to enable the achievement of these ambitious goals,” said Prince Mohammed Ben Salman. He added: “We are aware that climate change is an economic opportunity for individuals and the private sector, which will be stimulated by the Green Initiative for the Middle East, to create quality jobs and promote innovation. In the region “.

The Saudi Crown Prince also indicated that his country will ensure to establish a cooperation platform to implement the concept of circular carbon economy, create a regional center for climate change, and set up a regional capture complex, d use and storage of carbon.

With the “natural” presence of Gabon, a country in the Congo Basin, Saudi Arabia will also tackle, added Mohammed ben Salman, the creation of a regional center for early warning of storms, the creation of a regional center for the sustainable development of fisheries and the establishment of a regional cloud seeding program. These centers and programs will, he said, play a major role in creating the necessary infrastructure to protect the environment and reduce emissions and raise the level of regional coordination.

One of the objectives targeted by this summit is also the creation of the first alliance to fight climate change in the Middle East and of a platform of both expertise and financial capital to promote investment and transfer. know-how and knowledge. It is also about putting in place the pillars of environmental diplomacy, strengthening the political management needed to create radical change.